News Staff
A new paper finds that greenhouse gas emissions from standing dead trees in coastal wetland forests are not properly accounted for when assessing the environmental impact of so-called "ghost forests."

Ghost forests are what is left of former forests in coastal regions where changes led to shifts in the height of land. As salt water moves in, dead, white, trees are created. North Carolina has some that can even be seen from space.

The new analysis used portable gas analyzers to measure what are colloquially called "tree farts"; gases emitted by snags and from soils in ghost forests. Overall average emissions from soils were approximately four times higher than average emissions from snags in both years. And while snags did not contribute as much as soils, researchers said they do contribute significantly to emissions.
rising sea levels or tectonic shifts have altered the height of a land mass. 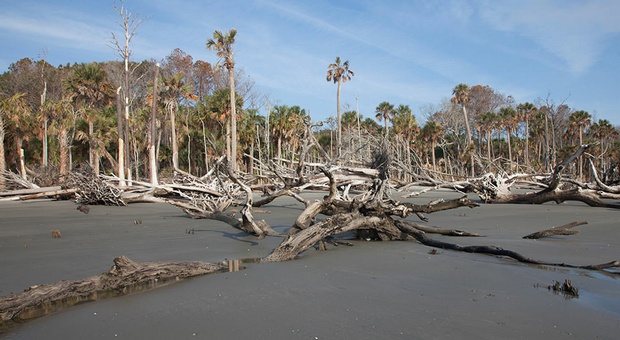 The tests for emissions of carbon dioxide, methane and nitrous oxide happened in dead pine and bald cypress snags in five ghost forests on the Albemarle-Pamlico Peninsula in North Carolina during 2018 and 2019.

In addition to finding that soils emit more GHGs than snags, the work lays the foundation for the researchers' ongoing work to understand the role snags are playing in emissions - whether they prevent emissions, like corks, or release them like straws. That is an area of future research they're currently continuing to explore.

"We started off this research wondering: Are these snags straws or corks?" said study co-author Marcelo Ard?n, associate professor of forestry and environmental sciences at NC State. "Are they facilitating the release from soils, or are they keeping the gases in? We think that they act as straws, but as a filtered straw. They change those gases, as the gases move through the snags."