Andrea Kuszewski
While Christmas shopping today with my sister and little 3 year old niece, I noticed something that rather disturbed me. And as difficult as it is for me to say this—it was Barbie. 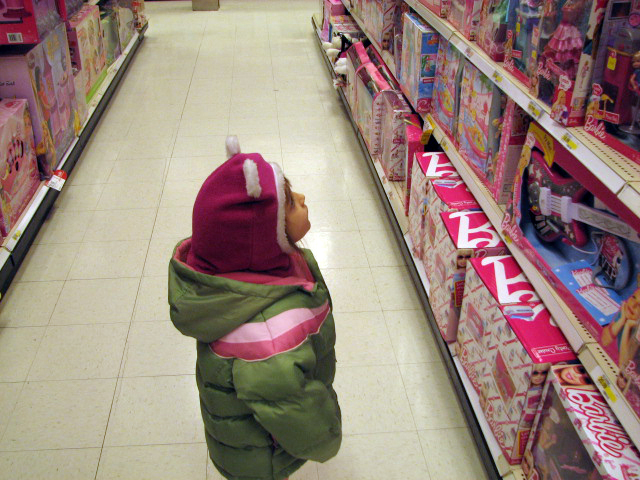 OMG. So many Barbies!

First, let me say that I loved Barbies as a young girl. I mean, I REALLY LOVED Barbies. I had so many Barbies, I lost count. I had a Barbie townhouse, a cottage, sports car, horses, boy-friends (Ken), etc, etc. I had so many clothes for Barbie, I had a huge trunk to keep them all in. As a wee lass, I spent pretty much all my time divided between reading encyclopedias and playing Barbies (what—didn't everyone?). So while I write this post, I am saddened to see my once beloved Barbie in such a painfully different light.

Barbie was the conduit for bringing my fantasies to life—working a challenging, yet fulfilling career, jet-setting, having a fabulous wardrobe, saving the lives of random citizens, and raising pets. Every so often, she was married, but usually single and loving life in the fast lane. Interestingly, Barbie's fantasy life from my youth is frighteningly similar in many ways to my current life. Only she had better clothes. But I digress.

I am not going to complain about Barbie's waist-to-hip ratio, or her idealistic/unrealistic beauty, or her breasts. I have no issue with Barbie's physical appearance or wardrobe—I have a problem with Barbie's career choices.

Now, I admit I have not been toy shopping in quite a while (since I don't have children of my own), so what I am about to discuss may not come as a surprise to some of you. There is a line of Barbies called "I Can Be..." which, essentially, is Barbie suited up in various professions. This is supposed to be a campaign to educate girls on the many different exciting careers that they have to look forward to as they grow up. You may remember News Anchor Barbie that was announced a few months ago: 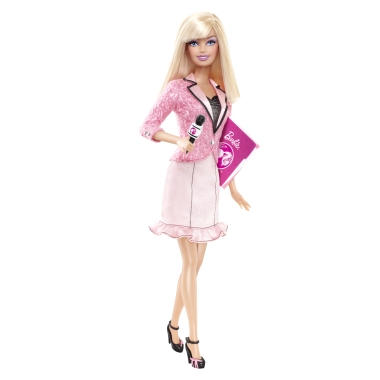 For the record: I heart the outfit. Especially the shoes. 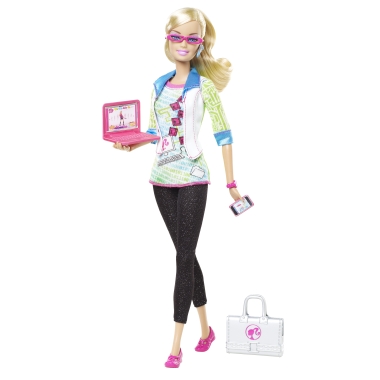 This is Computer Engineer Barbie—she's hot.

Apparently, News Anchor Barbie and Computer Engineer Barbie were added after a public vote for new professions to augment Barbie's CV (interesting fact: News Anchor Barbie won the "girl's vote" and Computer Engineer Barbie won the "popular vote"). These are fantastic additions to the initially chosen group of professions. As I looked through the remaining choices, each subsequent one made me wince even more, with a few exceptions.

Some of the dolls I saw in the store.

I went to the Barbie website to see the available choices in this line, hoping with all my might to get a wider selection than what was present in the store. And this is what I found. Get a load of all the exciting things Barbie is telling girls she can be when she grows up:

According to Mattel, I can be... Oh, where to start with this. Let's start with the positive and work our way to WTF, shall we? Computer Engineer—awesome. But this was only at the request of the people. Dentist, Racecar Driver, Pet Vet, Ballerina—all good. Pizza Chef and Ballroom Dancer—strangely random. I'm guessing the dancer was chosen due to the popularity of that show Dancing With the Stars. And for the badass dress.

What's the deal with Babysitter Barbie? I can be a babysitter when I grow up? Seriously?! Of all the possible choices out there, is that one of the best and most interesting careers to strive for? Oy.

I also have some issues with Kid Doctor Barbie. First of all, why not use the correct term, which is Pediatrician? Also, will no other type of doctor do? We are told we can be a doctor, but only a kid doctor. Because women are supposed to have kids, so this makes perfect sense to them, right? What about Surgeon Barbie? Or Radiologist Barbie? Or Neurologist Barbie? I would have killed for a Barbie playset that included an MRI machine or X-Ray films. Yes, those types of doctors may be lesser known to young girls, but isn't the whole point of this line of "I Can Be... Barbie" to inform and educate girls about the exciting careers that are available to them? I mean, girls typically love these dolls already, so you have them at "Hello, Barbie"—why not take advantage of that opportunity to really educate them and show them some of the wicked cool stuff that women do?

And saving the best for last: I can be a... Bride. Thanks for that enlightenment, Barbie! I think I actually grit my teeth and let out a few choice adult words when I saw this. Mattel is saying, if I try really hard in school, I, too, can be a bride. Not a woman with a career who also happens to be married, but a bride. Not a woman who decides she wants to be a mother, but a bride. So, if Ken had an "I Can Be..." line, would one of the options be Groom Ken? Or Husband Ken? Just wondering.

Finally, where is Scientist Barbie? Do they think they have the science field covered with Vet, Dentist, and Kid Doctor Barbie? What about Biologist? Or Physicist? Or Astronaut? Or Ecologist? Or, one of my favorite types of scientists, Paleontologist Barbie? Just imagine the potential accessories!

With all of the effort being made by so many organizations—as well as individuals—in trying to promote STEM fields to young girls, I am deeply disappointed in Mattel. Mattel has girls in the palms of their hands, and this is how they deliver.

Recently, I've heard some in the scientific community making HUGE outcries against really positive and inspiring campaigns, such as The Science Cheerleaders, because they "feel they don't represent women in science well enough" or "to their liking". But are they ok with "Babysitter" and "Bride" being two of the eleven careers chosen to inspire young minds?

As a scientist, I am not ok with this. Maybe Mattel should consult Darlene Cavalier of Science Cheerleader to get a clue as to the breadth of opportunities out there in science, tech, engineering, and math for girls. And as for you, Barbie, I want you to show me some science! But feel free to do it in a fabulous pair of heels.


*P.S. I'm getting on a plane in a few hours and won't be able to answer comments until (Thursday) early afternoon, but I'll get to them ASAP.

The Rogue Neuron
More Articles All Articles
About