Hank Campbell
It is raining in California as I write this but most of it will do little good. The rain is going to go to a gutter and the gutter will go to a stream and that will go to an ocean.

Yes, much of the fresh water that California has runs into the Pacific Ocean. You might wonder why the Pacific Ocean needs so much, since 96 percent of Earth's water is already in oceans, but the oceans are not asking for it. Instead, it is due to anti-science policies lobbied for by well-heeled California environmentalists.

Environmental regulations mandate that water that would sustain 4.4 million families gets flushed this way, regardless of drought conditions (however, farmers do get penalized during a drought, the environment must come before food). Meanwhile, Governor Jerry Brown just now got around to mandating water conservation among his wealthiest and most loyal voters. It had to be mandated because the wealthy are not conserving anything the way the more agricultural sections of California have been doing for two years.

It's not a surprise that Governor Brown and California government love fines and penalties and heavy-handed tactics, in a 'if your only tool is a hammer, every problem is a nail' kind of way, but if we cared about the actual problem - having enough water in good times and bad - the situation would be easy to resolve. For example, enough water to sustain 2.6 million California families was dumped into the ocean because there isn't enough storage capacity in the north of the state and environmental rules limit the amount of water that can be pumped to reservoirs in the south.

Why not allow more water to be stored in the south or build more reservoirs in the north instead of dumping fresh water into the ocean? Californians know water is important, we have agreed to water bonds totaling $22 billion in recent years, but the money has ended up going to environmental projects rather than things that help the people paying interest on those bonds.

Most of California is actually desert, the green parts are all watered to be that way, and we know droughts will happen - this is the fourth one in 50 years - so it would make sense to store more water, a literal anti-rainy day plan. But environmentalists block all efforts to create more reservoirs even though we know this sort of thing has always happened and will continue to happen. California water goes up and down like a yo-yo: 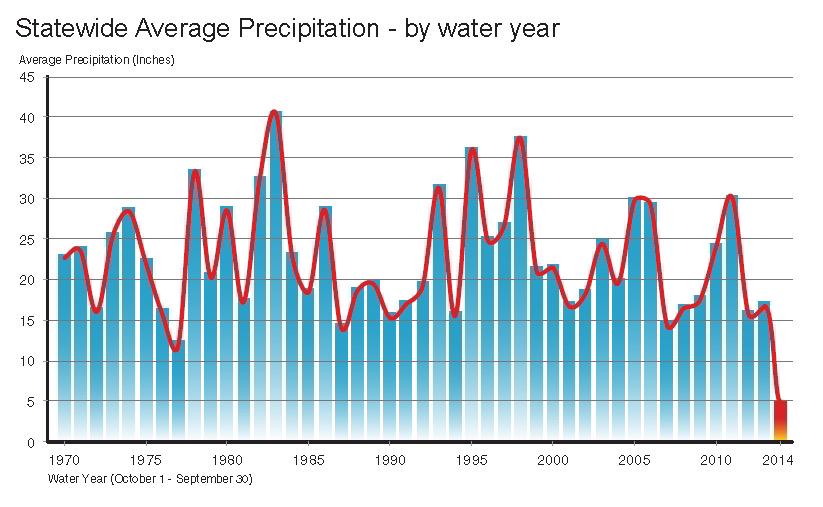 Why not do what people in real deserts, like Israel do, and create desalination plants? In California they are not affordable because we mandate 'green' energy and that has led to electricity costs that are 50 percent higher than the rest of the country. Then you have to factor in the environmental litigation costs. As the WSJ notes, Poseidon had to spend 6 years in court to get a permits for its desalination plant. In return they have to restore 60 acres of wetlands. Yes, in order to create fresh water in the future they have to waste fresh water on creating even more swamps now, while southern California people ration.

The common denominators in our water problem are a lack of snow and lawsuit-driven, rather than science-driven, environmentalism. We can only fix one of those.

Enjoy the rain, it won't last. But our environmental policy will remain all wet.
Science 2.0
More Articles All Articles
About