Hank Campbell
If you lived in Hilazon Tachtit, near  the Hilazon river of Israel 12,000 years ago, you might have borne witness to a world first; the earliest known religious ceremony.

The Natufian people had gathered to venerate the first known shaman, obviously someone who must have been a renowned sorceror and healer. She would not be the last. In 2010, a study in PNAS revealed that over the next few hundred years the Natufians brought numerous respected personages to bury them in a cave above their home - and each instance was occasioned with a celebratory feast.  They dined on ancient cattle and turtles but what was important is that they did it in the same place. The Natufians were the first known group to stop living as nomads and settle in a village. They were the first neolithic people in a paleo world.

As is often the case, local people had known of the cave for about 12,000 years but it was only in the 1990s that an archaeologist saw some flint shards and decided to climb up. Suddenly science had discovered a real treasure.  No one else was willing to carefully dig through 12,000 years of goat dung, after all.

What they found was magnificent; ancient burial pits, tools, and used charcoal that helped them date it all. There were 27 men, women and children buried there over hundreds of years. And in one they found the remains of an elderly woman about 5 feet tall and about 45 years old (chances of not surviving infancy, much less living to 45, were substantially different then). 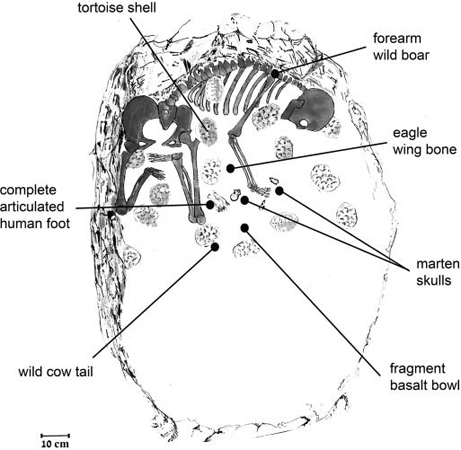 They knew she was special because surrounding her were her dozens of arranged turtle shells and parts of animals - even a human foot.

The feasts were huge, they consumed up 661 pounds of wild cattle at one. - that is how it was determined these must be august personages. An auruch was not slow like domestic cattle, it is why domestic cattle were created. And gazelles are fast even now. They did not eat those in daily life and the effort that went into hunting them was substantial, which meant the feast was significant.

The archaeologists studying the site believe it may have been more than just veneration - it may have been making friends with neighbors. Over time, more settlements arose, agriculture flourished, and that meant friction and paranoia. If they didn't want to be nomads and move again, they had to make friends when they could, and a giant leg of meat would do it.

As that modern day cultural shaman Homer Simpson noted in the "Lisa the Vegetarian" episode, "You don't make friends with salad."