Doug Sweetser
Third graders enjoy clay and pipe cleaners. It might sound cruel to teach them graduate level graph theory most math Ph.D.’s have not seen, but I might get away with it if I uses the right craft supplies. Tell kids spinach is good for them. Children are right to skeptical, as I expect of my reader.

Real numbers are the most important numbers out there, bar none. Even for people working with category theory can have Elmo count their functors as long as they are written down on a piece of paper. While I have watched Elmo count four ducks, four birds of a feather, a few hundred times, I have not seen him do any multiplication. No doubt this would be the first step:

Here is what it looks like in clay and pipe cleaners: 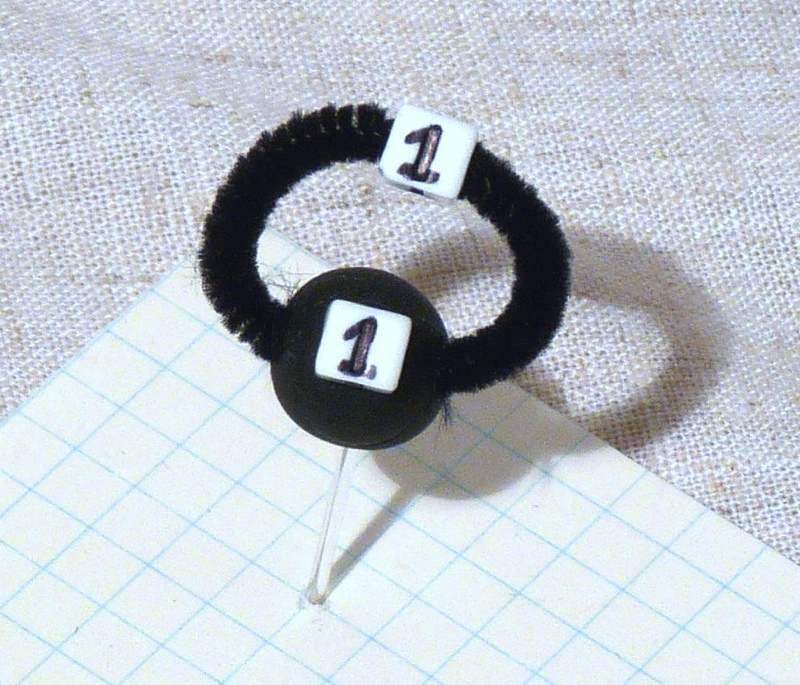 The clay ball is the vertex, the pipe cleaner is an edge. Both are labelled. Vertex 1 times edge 1 brings us back to vertex 1. This sounds too simple. I recognize that few of the esteemed readers here are still in third grade, rare that a school would hold back a pupil for decades, although if you are that special, I apologize.

The next step for Elmo is... no, this would never be done in the real world, because the real world is real, no need to use imaginary numbers that are far, far to difficult to ever understand even as a post-doc. Yet children do have great imaginations, so they should be naturals with imaginary numbers. Look at the math:

Um, actually, that is darn similar to the last one. The graph theory is the same except that the label for the vertex gets changed. No visible difference at the clay and pipe cleaner level between real and imaginary numbers.

I am a guy with two clay balls, one labeled “1”, the other labeled “i”. I am not a three balls guy, so  one of the labels gets a “-i” for the edge or vas deferens (pop anantomy quiz: two testicles are not connected together by the sperm ducts, so please draw an accurate picture of the private plumbing. As a bonus, explain to anyone seeing you answer this pop quiz how this relates to the number theory of theoretical physics). The real numbers on edges make for undirectional graphs. The imaginary numbers on edges make for directional graphs. Complex numbers have two undirectional and two directional edges connecting their two vertexes.

To do quaternions, you need more balls, two more balls. 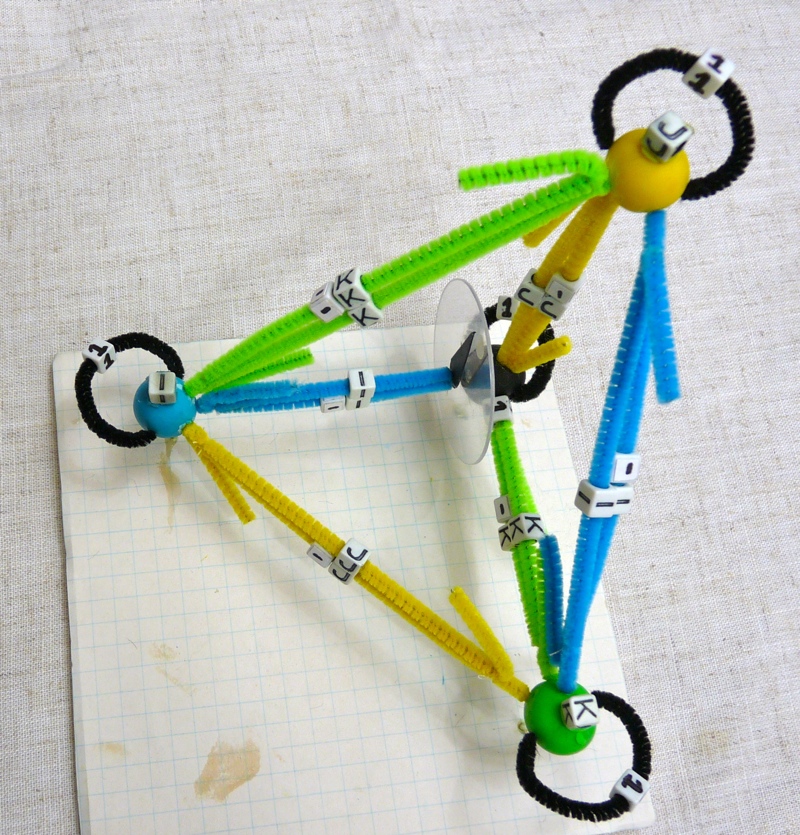 Let’s take a survey where I know the answer: how many of you have built the graph theory for a quaternion? Without collecting any data, my guess is zero. If you have, you will know what a pain in the ass it is to get those two pipe cleaners to go into the one hole in the clay. I had to tie a little piece of string around a little pair of pipe cleaners, tie a tiny knot, clip off the extra, all without knocking down the delicate structure. Once you have done this 12 times, you say, “Fuck these two pipe cleaners” (hopefully without the kids in earshot). Build this simpler structure: 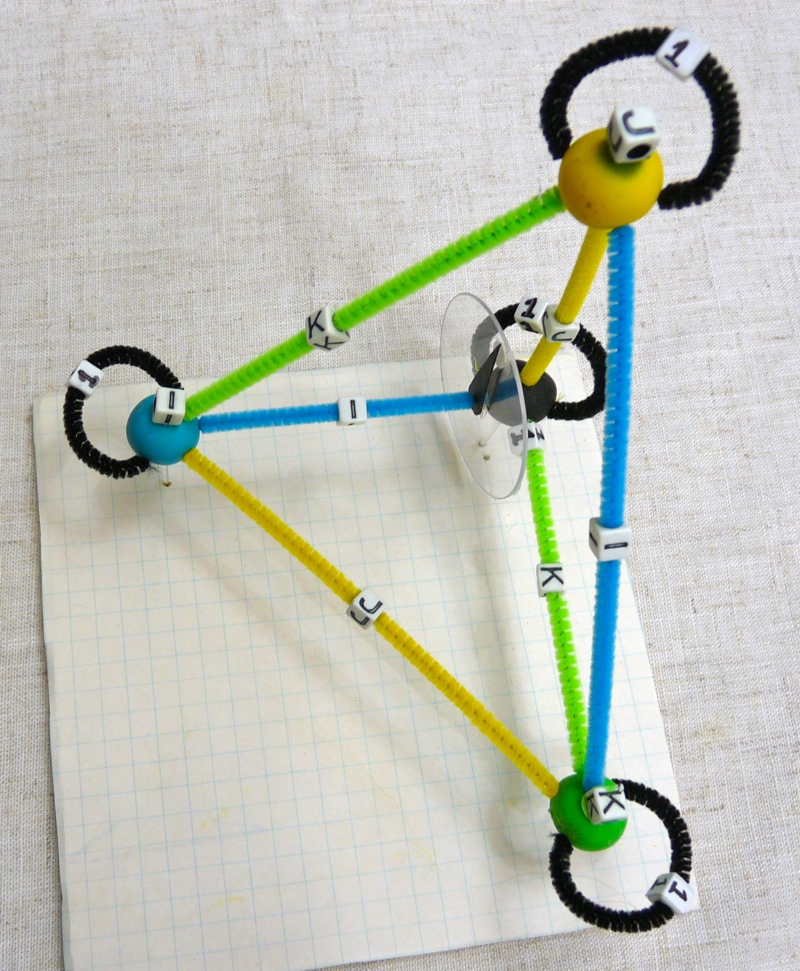 The rules are simpler too:

All undirectional graphs, every last one of them. Much easier to build and maintain. Formally this is the graph for the Klein 4-group. I like to call this the California representation of hypercomplex numbers. Always sunny out there in California compared to New England, and there is not a minus sign in their house. No negativity, all about love, making things bigger for all.

It is these two graphs constructed out of clay and pipe cleaners sitting on a shelf in the basement that ground my belief that quaternions and hypercomplex numbers together may be sufficient to completely describe patterns of events in spacetime.

I am well aware of the soiled reputation quaternions have in the theoretical physics world. One solid justification is that the Lorentz group cannot be written using quaternions. That one failure is enough to avoid them as people avoid people with leprosy. But I worked on leprosy the disease. One of few lines of a technical paper I can quote goes: “Research over the past 100 years to infect people with leprosy have failed.” Much to the tremendous pleasure of the people coerced into the studies! People are visual, not so analytic. Leprosy is the most visually damaging disease, and thus the most feared. But the mycobateria that causes it does not jump from person to person with any efficiency whatsoever. It is thought that if a person has a genetic flaw, and much repeated exposure, then they have a chance of picking up this slow growing bacilli that is easily treated with sulfur drugs. Only if you are really unlucky, really poor, could you get Hansen’s disease, and then have to be unlucky and poor not to have it treated effectively. Two or three million people fall into this class worldwide.

Last July I figured out how to represent the Lorentz group with quaternions. If you have the math chops to understand the claim, I will leave it as a puzzle at the end of this post which is targeted for the third grader. Point of full disclosure: of course I own quaternions.com, but pursuant to the guidelines of Science 2.0, I am not trying to drive traffic there (mostly because there are no ads there, no income stream to tap). Some will claim I am a quaternion zealot. Let the two graphs presented here be a counter argument. Quaternions cannot do it all, the hypercomplex numbers are just as vital.

Here is a sketch of my road to a unified standard model, distinct from a unified field theory which historically focuses on gravity and EM alone. One need to get to B2 - E2 and E.B, drop that into Euler-Lagrange, and out pop the Maxwell source and homogeneous equations respectively. I can do that in a gauge invariant way with quaternions, simpler than the contraction of the EM field strength tensors. I repeat the exercise with hypercomplex rules of multiplication, the ones with no minus signs. If you think about the two graphs in this post - superimpose one on the other in your mind’s eye - you might be able to convince yourself that exactly half the signs change. Give me 15 clean blackboards and two hours, I could show you in excessive detail that exactly half the signs change. You can spot good old Newton’s law of gravity plus a time dependent term, showing respect for the speed limit of light. There is no no monopoles law, but that is good because mass has but one charge. Using hypercomplex numbers does mean gravity is all about love, all about attraction, all that ever happens in the Hollywood version of sunny California. Do the Lagrangian to field equation routine a third time, using the hypercomplex Lagrangian minus the quaternion stuff, in a way that the hypercomplex stuff depends on a gauge and cannot travel at the speed of light, and the quaternion stuff depends on the same gauge exactly the same way, but overall, the magic of a minus sign cancels both gauges so the Lagrange density overall is gauge invariant. The Higgs mechanism is a cute solution, but I prefer a cute Lagrangian. I could get Elmo to can point to a quantum field equivalence principle in the Lagrangian that the standard model plus the Higgs mechanism cannot.

I will stand next to this strong statement: the derivation and field equations for the GEM unified standard model proposal are drop dead gorgeous. That claim already applies as is to the Maxwell equations, which are stunning. I am inviting a few more of beauties to the party.

There are mountains, mountains and mountains left to climb, but at the base, is this vision of numbers for spacetime made from clay and pipe cleaners.

Good luck in your studies,
Doug


Snarky puzzle:
"Quaternions came from Hamilton after his really good work had been done; and though beautifully ingenious, have been an unmixed evil to those who have touched them in any way, including Maxwell." Lord K.

Quaternions have been a one-trick pony, good for doing 3D rotations since the 1850’s. We presume you have received a good enough education to write it down as:


where I is an arbitrary 3-vector. Show how if hyperbolic sine and hyperbolic cosine functions are swapped in, evil results: while two terms are correct, two terms are missing, and two other terms that don’t belong soil the calculation any finely educated simpleton would try first. Your job: unmix the evil. For this not simply connected group, find another two combinations of these hyperbolic functions, R, and conjugate operators that correct the flaws. That is what “not simply connected” means, that things must be added together, or did they skip the obvious in your group theory training? Should you tire of the strain, the answer is on a preprint server. Note, that is not the preprint server, since those living on the ultra-conservative fringe have to build their own servers out of fairy dust and Drupal. Very old school here, pre-school, grad school, fringe school, whatever.


Note to any reader getting this far: it is my goal to create a blog once a week, including the video. Will see if I can maintain that rate of production.
The Stand-Up Physicist
More Articles All Articles
About