Until such time as an official report is issued it will be difficult for both professionals and ordinary members of the public to determine what most probably happened during the last flight of AirAsia 8501.  That is most unfortunate because passengers have a right to fly as safely as is humanly possible, and safety cannot be assured unless manufacturers, operators and pilots have the most up-to-date knowledge available about the causes of accidents, so as to avoid repetition.

This article is based on credible reported evidence, photographic evidence and reports both official and unofficial of past air accidents.  It is intended to provide the reader with an in-depth understanding of the science and engineering facts which show what most probably happened to AirAsia flight 8501.  The author does not pretend to know what did in fact happen: a hypothesis, however plausible, is not a fact.  For the benefit of readers who do not have the time to read the whole article, a brief synopsis is presented next.

AirAsia 8501 is known to have been flying in the vicinity of thunderstorm activity.  It appears to have been lofted by rising air in the same manner and at about the same rate as BMI flight BD8412 of May 26 2003.  (The AAIB report shows that BMI A321-231, G-MIDJ, executed an uncommanded climb due to thunderstorm activity at a rate which was at one point 5,900 feet per minute.  The plane suffered hail damage, but landed safely.)

Sensor failure is a possible additional factor in the loss of flight 8501.  There have been multiple instances of invalid pitot-static system or Angle of Attack (AoA) sensor data causing uncommanded flight maneuvers.  The Airbus design philosophy leads to complicated procedures when pilots try to gain direct control once they determine that the computers are in error.  While the pilots are trying to gain control, the computers may well be flying the plane in an exceedingly dangerous manner due to erroneous data.

AirAsia was likely brought down mainly by extreme weather conditions.  Sensor failure under such weather conditions is both possible and likely.   Sensor failure, if it occured, is likely to have been compounded by the complicated and time-consuming procedures which the pilots needed to follow in order to gain effective control of their aircraft.  The pilots did not have enough time and altitude to recover control.  The photographs of the wreckage indicate that either a stall or more probably a flat spin led to a mainly vertical drop onto the sea with the fuselage horizontal..

Scientists and engineers not directly involved in an accident investigation can assess only those facts which are in the public domain: all else is speculation.  It does not help when sources give conflicting information.  However, in this age of web 2.0 and Science 2.0 we now have AAI 2.0 - Air Accident Investigation 2.0.  There are many web sites where professionals and ordinary members of the public debate the likely causes of air accidents.  Perhaps the best known and most "go-to" site as far as journalists are concerned is PPRuNe - the Professional Pilots Rumour Network.  The AirAsia incident appears there under the heading Rumours and News.  It is unfortunate that many journalists seem unable to distinguish the one from the other. 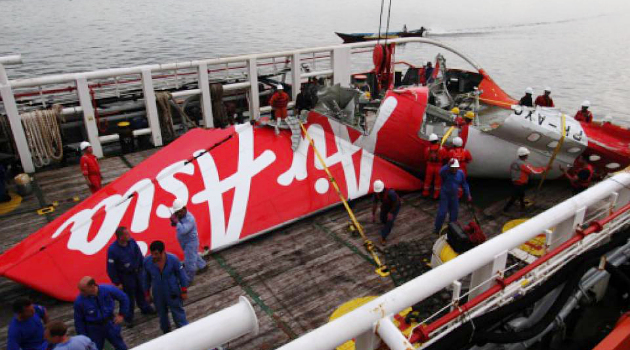 The Straits Times reports that a further 7 bodies have been recovered and the flight's ELT - Emergency Locator Transmitter has been found.

"On Sunday, a local fisherman found the ELT in waters near a beach in Mamuju regency. It seems the ELT can no longer function, however," said the head of the National Search and Rescue Agency (Basarnas) in Mamuju, Muhammad Rizal.

The ELT appears to have drifted about 1000 kilometers from the crash site.

More bodies and parts of the aircraft have been discovered in the area of Mamuju.  The Basarnas agency is extending the area to be searched for bodies, apparently on the basis of the calculated drift over time.  Apparently 90 bodies have been recovered so far.  With many small boats and some 60 divers now searching the chances are high that more bodies will be found.

"We are intensifying the search by combing the length of Sulbar waters. Both from Majene to Mamuju, as well as from the waters of Majene-Polewali, "said Chief BPBDs Polman, Mansour.

Feb 2 (Reuters) - "Up until today, there is no indication yet that the captain left his seat as reported by Reuters," Ertata Lananggalih, an investigator with the National Transportation Safety Committee (NTSC), told Reuters at the team's office in Jakarta, referring to the story published on Saturday.

People familiar with the investigation had earlier told Reuters that investigators were examining maintenance records of one of the plane's automated systems, the Flight Augmentation Computer (FAC), and how the pilots may have reacted to any outage.

Bloomberg News reported on Friday that the pilots of the crashed plane had tried to reset the FAC during the flight, and had then pulled a circuit-breaker to cut power to the device.

People familiar with the matter told Reuters it was the Indonesian captain who took this step, rather than his less experienced French co-pilot, Remy Plesel, who was flying the plane.

The suggestion that the Captain left his seat to power off the two FACs - the Flight Augmentation Computers - has been treated in an appallingly bad way by the media.   A conspiracy theorist might well think that big business is trying to blame the pilots.  If the breakers were in fact pulled then that is a perfectly acceptable thing to do when a specific fault condition occurs.  It is a the only way to save the plane under specific fault conditions, of which more below.  Reports that the Captain "left the First Officer to fly the plane" imply wrongdoing.  Even worse, the Independent, which is usually a reliable source of fact, reports that the Captain's behavior was "very unusual".  This expression carries, not so much a weight, as a veritable cargo of implicature such as to convict the pilot of wrongdoing in the eyes of the world.

The Airbus A320 has two Flight Augmentation Computers - FACs.  What they augment is the protections which are built into the fly-by-wire systems.  The intention is that the active FAC will not allow a pilot to command any maneuver likely to damage the plane.  Under normal conditions various transducers and other computers will feed accurate flight data to the FAC which will then deny the pilot the ability to execute an unsafe maneuver.  However, in the event of transducer failure it is possible for the FACs to deny the pilot the ability to fly the plane out of danger.  This has happened in the past.

There are two buttons within reach of the flight crew marked FAC1 and FAC2.  They are marked on/off.  However, just as the power button on a PC does not switch off the mains input to the power supply, so it is with the A320 FAC.  For as long as one FAC is valid (according to automated tests) it will continue to govern the flight envelope regardless of what the pilot does with the on/off pushbutton.  If a faulty transducer is causing the FACs to reject valid pilot commands, thus placing the plane in grave danger, they must be powered off at the circuit breakers.  These are located behind the Flight Officer and can be most swiftly reached by the Captain.

In the case of Air France 447 the pitot tubes were blocked by ice.  These devices provide information about altitude and speed, the two most vital pieces of information for any pilot - or autopilot.  Subsequent to the Air France accident different pitot tubes have been used by Manufacturers but pitot problems persist.   A European Air Safety Agency - EASA - Airworthiness Directive of 05 December 2014, AD No: 2014-0237R1 directs Airbus operators to replace specific pitot tubes which may not provide accurate data in adverse weather. 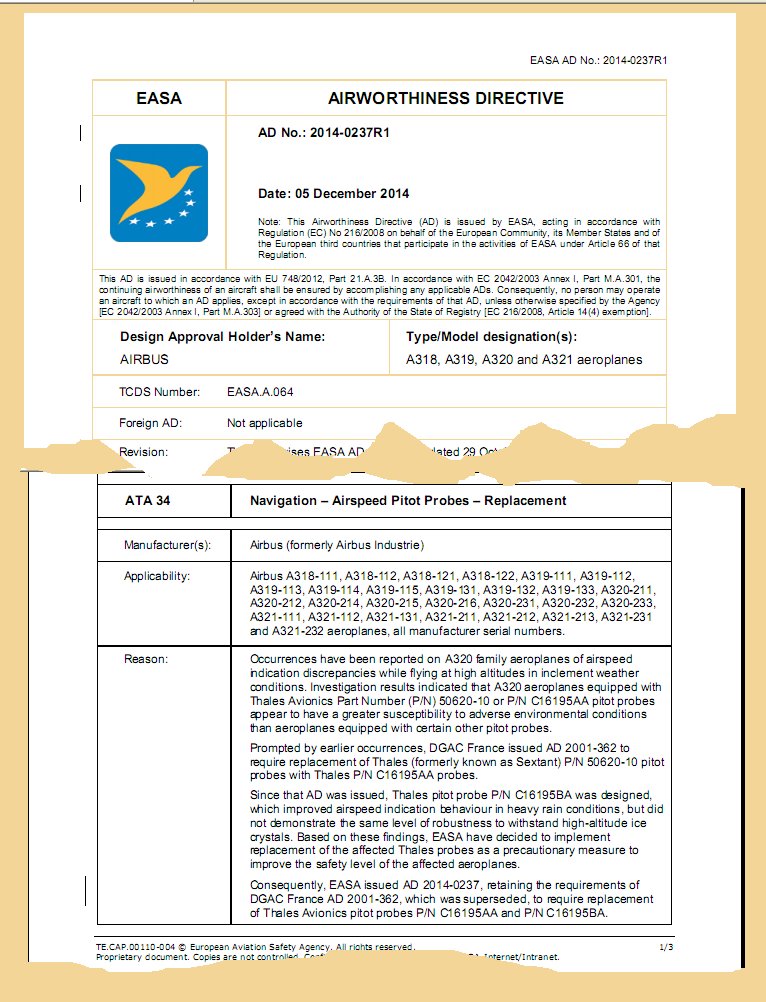 
The pitot-static ports are openings to the air.  This leaves them vulnerable to intrusion by foreign matter.  When the plane is not in use, or when it is being cleaned or painted these ports must be covered by special brightly colored covers with "remove before flight" tags.  In 1996 a worker covered a plane's ports with silvery tape.  It was not removed and was not seen in the dark by anyone else.  The consequent massive instrument failure led to the loss of Aeroperú Flight 603 with all on board.  The air transport industry needs to be ever vigilant against recurrence of this human error.

Failure to cover the ports can also lead to disaster.  There have been many reports of insects in pitot tubes.  In the case of Birgenair Flight 301 it is not known but likely that the pitot tubes were blocked by insects.  The mud dauber wasp has been implicated in many air incidents.  The Australian Transport Safety Bureau - ATSB - reports a wasp nest in an Airbus pitot tube which led to an emergency landing.

... The captain’s probe was removed from the aircraft and sent to the probe manufacturer in the USA. Examination showed that it had been almost completely blocked by an insect nest, composed of sand and mud, that was consistent with the nest of a ‘mud-dauber’ wasp.

A previous incident at Brisbane in 2006 also involved an obstructed pitot probe due to insect activity. 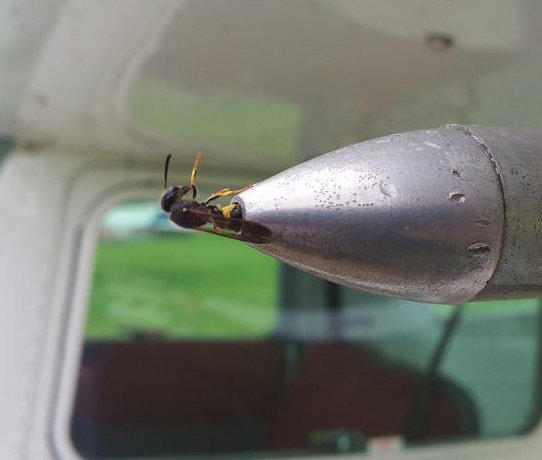 The Angle of Attack, AoA or alpha, is the angle of the flow of air relative to a reference line such as the fuselage horizontal datum.  A wing is often attached to the fuselage at an angle: the rigger's angle.  In such a case the angle of attack in flight will remain positive until the plane is flying nose down.  The AoA must be maintained between specific limits to ensure safe flight.  At some limiting positive angle the flow of air over the wing will cease to generate enough lift to hold the plane in flight.  In such a condition the wing is said to be stalled.

AoA sensors are provided on most planes to give pilots a direct reading of the AoA and to warn of an impending stall.  In the case of the A320 computers detecting a stall the active FAC will force a nose-down trim and will increase engine thrust.  If an AoA sensor is faulty the plane may already be descending when the computer, falsely detecting a stall, increases the angle and rate of descent.  With alpha protection engaged the pilot cannot over-ride the computer using his side-stick.  Counterintuitively, setting both FACs to 'OFF' via the pushbuttons does not in fact power them off and does not let the human over-ride the computer.  Unless FAC power is removed rapidly the plane may be doomed.

To be continued ...
A link will be inserted here when the next part has been posted.

AirAsia 8501 - Both Black Boxes With NTSC

AirAsia QZ8501 No Explosion
Air Asia flight 8501 did not explode: it burst open on impact with the water.