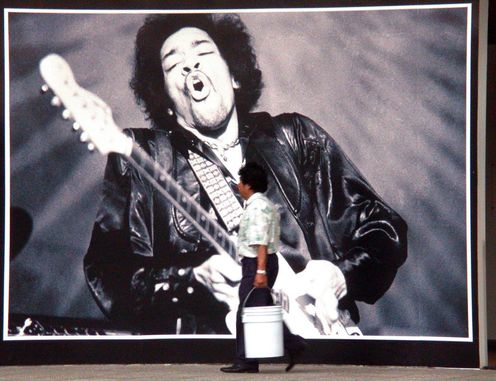 Jimi Hendrix is a member of the so-called 27 Club. A very exclusive club, as it turns out. EPA/Eduardo Miranda

By Dianna Kenny, University of Sydney

I refuse to join any club that would have me as a member. – Groucho Marx

Now he’s gone and joined that stupid club. I told him not to … – Kurt Cobain’s mother upon hearing of the death of her son

Below is a visual representation of the percentages of deaths at each age. So why isn’t there a 56 Club or a 28 Club? Is it because Brian Jones (drowning), Jimi Hendrix (aspirated vomitus from barbiturate overdose), Janis Joplin (heroin overdose), Jim Morrison (drug-induced heart attack), Kurt Cobain (suicide by gunshot) and Amy Winehouse (alcohol poisoning) all died at age 27? All were tortured souls who reached pop stardom and died tragically at their zenith. Perhaps we need to consider a change of name for this group – from the 27 Club to “The Tragic Six” or “The Tragic Seven” if we include Robert Johnson?

There are many more musicians who died at the age of 27 than these six (or seven) – there were another 137 in my population including the very notable musicians named earlier. So …

What percentage of pop musicians needs to die at age 27 to support the existence of the 27 Club?

Here is a thought exercise we can submit to statistical scrutiny to answer the question: how many pop musicians need to die at the age of 27 to justify the notion of a 27 Club. The actual proportion is 1.3%. Do we need 1.4%, 1.5%, 1.6%, 2% or 2.5% of popular musicians to die at the age of 27 to conclude that age 27 is associated with a higher risk of death than other ages?

We can test this question using a single sample ChiSq test, which assesses whether there is a significant difference between the expected frequencies (i.e., specified proportions of deaths at 27) and observed frequency of actual deaths.

As the table shows, a minimum of 1.5% (n= 177) of deaths in the population need to occur at age 27 to “justify” the 27 Club statistically. It is at this number that the ChiSq value exceeds the critical ChiSq. In other words, the actual number of deaths is significantly less than the number that would need to die at 27 if the 27 Club hypothesis were correct based on numbers alone.

But even at 1.6% of deaths occurring at 27, few would argue that this constitutes a sufficiently large proportion of deaths. The idea of the 27 Club has been imprinted into the collective imagination by books on the subject – such as Howard Sounes’s biographical book 27, on the big six 27-ers, Sarah Milne’s wider coverage of pop musicians who have died at 27, and Michael Owens' more fanciful treatise on the significance of the age of 27, together with continued media fascination with the notion. But other investigations into the 27 Club, for example, by Eric Segalstad, Martin Wolkewitz, and mine, have concluded that the age of 27 does not bestow any greater risk of death in popular musicians than other ages.

Notwithstanding, all of these studies have identified an increased risk of death in pop musicians during the younger decades of the lifespan compared with the general population.

Sampling strategy and sample size varied between studies but the conclusions were essentially the same, as in my recent research findings, that pop musicians die younger than the general population.

They concluded there was no peak in risk at 27 years, but observed a two- to three-fold increase in risk of death for British pop musicians with number-one albums between 20 to 39 years compared with the general UK population.

The 27 Club is not just about the numbers

I would like to give some comfort to those who might grieve the demise of the 27 Club.

While the actual numbers of pop musician deaths don’t show a spike in deaths at age 27 and hence do not support the 27 Club, there appear to be qualities shared by the 27-ers that stand them apart from many other deceased young pop musicians, which may go some way to understanding how this club entered the pop culture psyche. These qualities include exceptional talent, the contribution of groundbreaking innovations in their musical genre, intense psychological pain, a squalid death at their peak, and immortalization – each of “the tragic six” has become a cult figure.

Jimi Hendrix was described in Rolling Stone as:

the greatest guitarist of all time […] one of the biggest cultural figures of the Sixties, a psychedelic voodoo child who spewed clouds of distortion and pot smoke.

His unrepeatable virtuosity on the electric guitar received the following citation in the Rock&Roll Hall of Fame:

[Hendrix] expanded the range and vocabulary of the electric guitar into areas no musician has ever ventured before. His boundless drive, technical ability and creative application of such effects as wah-wah and distortion forever transformed the sound of rock and roll.

Janis Joplin, “the greatest white blues mama who ever lived”, was crowned “First Lady” and “Queen” of Rock and Roll. She died only two weeks after Hendrix. Although the official cause of death was heroin overdose, Janis fell into a “yawning chasm of tortured loneliness”. Then, “the life was gone, the legend was born”.

Just a year later, in 1971, the wild, handsome, charismatic Jim Morrison exited the pop music scene in similar fashion. Because of the proximity of these three deaths, the kernel of the idea of a 27 Club was born.

Immortalized in death, a life-size bronze statue of Amy Winehouse has just been unveiled in London.

Dianna Kenny, Professor of Psychology and Music at University of Sydney, receives funding from the Australia Research Council and the Australian Council for the Arts.