Tommaso Dorigo
Version 2 of a thick textbook on particle and astroparticle physics is out, and you should have a look at it (well, at least if you're seriously interested in the topic!). The book, titled "Introduction to Particle and Astroparticle Physics" (not a very imaginative title, admittedly, but at least a faithful one) has a more descriptive subtitle: "Multimessenger Astronomy and its Particle Physics Foundations". It is authored by Alessandro de Angelis and Mario Pimenta, two acknowledged experts of the field.
The previous version of the book, dated 2015, was very successful, so the editor (Springer) insisted that a second edition were made: in the very few years from the first edition, so much has happened in astroparticle physics that a revision seemed compulsory. Well, now it's there! 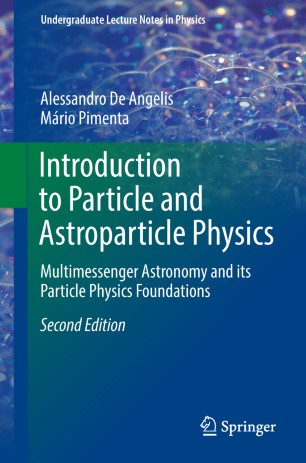 The book constitutes a honest attempt at providing readers with everything they need to understand the basics of this multi-threaded field, from an experimentalist perspective. Of course, the subtitle gives away that the book is primarily aimed at astronomers and astrophysicists, but I would argue that particle physicists would also benefit from reading it, as indeed the text is an excellent entry point to the study of astrophysics - a topic whose detailed knowledge many of my colleagues (and myself) guiltily lack.


As a matter of fact, the extensive treatment of many topics grants the work the status of something more than a textbook, leaning toward the consultation work. Quoting from the preface:

This book is addressed primarily to advanced undergraduate or beginning graduate students, since the reader is only assumed to know quantum physics and “classical” physics, in particular electromagnetism and analytical mechanics, at an introductory level, but it can also be useful for graduates and postgraduates, and postdoc researchers involved in high-energy physics or astrophysics research. It is also aimed at senior particle and astroparticle physicists as a consultation book. Exercises at the end of each chapter help the reader to review material from the chapter itself and synthesize concepts from several chapters. A “further reading” list is also provided for readers who want to explore in more detail particular topics.


Let us give a peek at the contents. After an introductory chapter, which aptly sets the stage by introducing some of the driving topics that the book addresses, we find in it ten others, which deal with the following:

A few notes are in order. The chapter on the "basics" of particle physics is already quite dense, as it walks the reader through the theory of scattering, from Rutherford to particle colliders, and it includes a description of special relativity, without neglecting to quote the relevant formulas and theoretical foundations.

The following chapter starts back from a more "historical" point of view, introducing particles as they were discovered, in cosmic rays (a pivotal theme of the whole book). This approach is the classical one for a book on astroparticle physics, but I found the division of the material between this and the previous chapter a bit artificial. Still, there is complete coverage of all the important topics overall.

Following the chapter on cosmic rays there is a description of particle detection, a pillar of experimental physics which rightly gets its own chapter. It covers an enormous amount of material, from the physics of the interaction of radiation with matter, to the means of detecting it, to a discussion of the various detectors on the market, to a few examples of giant detectors for collider physics, neutrino physics, astroparticle physics. The chapter also contains a succinct description of the physics of particle accelerators (what authors call "artificial accelerators", betraying their bias toward astrophysics and its "natural" acceleration mechanisms). I think this chapter shows how authors did make an attempt to be complete, but in earnest I cannot consider it a place where I would look for details of any of these topics - in this sense, one cannot really call it consultational.

The chapter on particles and symmetries starts by describing group theory and Noether's theorem, and walks neatly its way through to the definition of the algebra of the important SU(2) and SU(3) groups which form the basis of the standard model of particle physics. Then the quark model is introduced, with a reprise of the theme of particle scattering which allows the authors to discuss more in detail the proton structure, quarks, and leptons. I found it rather different from other approaches; it seems a compromise between a historical recounting of how we got to discover the building blocks of matter bit by bit, and a more pragmatic "this is what there is" approach.

As if feeling guilty that they have not treated the topic before, chapter 6 on interactions and field theories comes to the rescue with a theoretical discussion of the quantum theory of fields. Again, a lot of material is covered here, and it is a bit hard to follow the thread, although I well understand the choice of the authors to try and cover everything that the reader may need. Weak interactions and QCD are treated extensively, moving to more experimental discussions toward the second part of the chapter.

In chapter 7 we get to the discussion of the standard model. By now all the mathematical preliminaries as well as experimental notions have been introduced, so this chapter is quite homogeneous and it unfolds quite linearly, giving a very good treatment of the Higgs mechanism, as well as the standard model and its mathematical formulation. This allows the second part of the chapter to again focus on the experimental side of the issue: the tests of the model, the discovery of the Higgs, and related measurements. A concise last part discusses extensions of the standard model; maybe in a modern textbook this topic would have deserved a chapter of its own.

Chapter 8 gets into pure astrophysics territory: there is another "standard model" to introduce here. Cosmology is introduced with a very experimental slant, and I found this chapter quite readable and useful for newbyes. Then the cut becomes more theoretical, quite unlike the style of the previous chapters where one started from theory to experiment. Then many new physics theories are introduced - the fact that authors prefer to look at the astrophysical interpretation of new physics than the particle physics one appears evident if one compares this part of the text with the ending part of the previous chapter.

Then chapter 9 discusses the physics of neutrinos. The choice of devoting a full chapter to these elusive particles is a telling sign, in my opinion - of course, the physics of neutrinos has been one of the crucial connecting bridges between particle physics and astrophysics in the course of the past 40 years. So it is quite appropriate that their physics be covered in detail. The cut is again quite experimental, with all the main measurements and discoveries covered in detail.

Chapter 10 is a discussion of the "messengers" - cosmic rays, gravitational waves, neutrinos. Again, here the slant is experimental. I feel unable to comment on the completeness of the text, as I am not an expert. The text appears well readable and quite extensive (over 100 pages), so I am a bit surprised that a sub-sub-section is titled "multi-messenger astrophysics". It is exactly half-page long. I was expecting that a textbook on multi-messenger astronomy would devote more than that space to the topic!!

Indeed, the field is quite new - the first coincident source of gammas and neutrinos has been announced just months ago, when the book was probably already in print. But I would have liked more discussion on the way different detectors can play together, the expectations for the future, etcetera. This information is certainly present in other places in the book, but indeed the contrast between having the word "multimessenger" in the title and having half a page discussing the topic explicitly is stark.

The last chapter starts with a question: what is life? Indeed, astrobiology has become an important new discipline in the last few decades, and the discovery of thousands of new planets outside our solar system calls for more attention to this topic. I am therefore happy to see that the authors decided to discuss the general topic of life outside earth, how to search for it, and the implications.

All in all, this is a very important book, which a serious student of astrophysics cannot ignore. The goal the authors set to themselves was quite ambitious, maybe too much so, and I feel they reached it only in part - the book is more than a textbook for a course (probably, as the authors themselves advise in the foreword, it is material for several courses), and it is less than a book for consultation, as by necessity some of the topics are not covered in full depth. But that does not detract from the commendable effort. As a picture of particle physics and astrophysics, it is as good as you can get it on the market today.