Tommaso Dorigo
The CMS Collaboration submitted for publication last week a nice new result, where proton-proton collisions data collected by the experiment during the past run of the Large Hadron Collider were scanned in search of very peculiar events featuring a weak boson (W or Z) along with two energetic photons. The rate of these rare processes was measured and found in good agreement with predictions of the Standard Model of particle physics.


Now that you have read the above abstract, I wonder what else can I say here to keep your interest up. Indeed, weak bosons have been discovered 38 years ago, and we know their properties very well already, from a number of past measurements and studies. As for photons, they are THE most common particle in the universe, so really, can't those CERN scientists find some better use of their time?

But wait. We are not talking about a boson here and a photon there. We are talking about a single proton-proton collision materializing out of nothingness a heavy W or Z boson, together with two very energetic gamma rays. This is an exceedingly rare phenomenon in fact - one that happens only once in a trillion collisions. Physicists are really interested in very rare events of this kind, because when something is exceedingly rare as produced by standard means, its study may be the best way to reveal if something else also contributes to the total rate. This is what we call "measuring zero": if we find zero (or something in the whereabouts) then all is as predicted, but if we find anything different from zero we have discovered something. If we instead studied reactions that are common according to the Standard Model it would be much, much harder to reveal that something else is contributing. In other words, it is much easier to find a needle in an empty barn than a needle in a barn filled with hay!

Besides the intrinsic interest of studying rare reactions, let us look into what produces them, and maybe I will be able to convey some more of the awe that I feel when I consider them. A W or a Z boson can be produced in proton-proton collisions when a quark and an antiquark annihilate. This already looks weird: where was the antiquark to begin with? Well, inside the proton!

In fact, the proton does not only contain the so-called "valence" quarks (two up-type quarks and one down-type quark): its "static quark model" picture of three quarks bound by gluons is not the whole story. When you hit a proton with another hard and small thing, you may chance to directly hit one of its less manifest constituents -a quark or antiquark from the "sea". These are as genuine quarks and antiquarks as these particles come, but they share a smaller fraction of the total proton momentum than the valence ones, on average. So you need a lot of energy (which the LHC does offer) to make a W or a Z boson through a hit between a quark and an antiquark.

Once produced, the W boson can readily emit photons by itself, as it is electromagnetically charged. The Z boson instead is neutral, so it cannot emit photons. How do you get a pair of photons accompanying the Z, then? Well, these may be produced by the two charged leptons that the Z occasionally decays into (6% of the time a Z boson will decay into an electron-positron or a muon-antimuon pair). The electron and the muon are charged, so they do emit photons, on occasion.

But there is a third way to get photons in the final state of the event: this happens by what is called "initial-state QED radiation", another phenomenon worth mentioning. In general, it is no surprise that the quark and antiquark have a chance to spit out an energetic photon before annihilating into a W or Z: they, too, possess an electric charge, and so they "couple" to the photon, albeit with smaller intensity than leptons (quarks possess fractional charges, so the coupling is weaker). But the fun thing is that it is precisely because of that emission of energy in the form of a gamma ray that the pair of quarks may annihilate into a W or Z boson! In fact, they are likely to do so if they initially possess too much energy.

The thing goes like this: a quark and an antiquark are on a collision course as the protons get close. Their quantum numers are exactly the right ones to allow an annihilation: they have a null total colour charge, and their total electric charge is 1 (if they are about to produce a W) or 0 (for a Z). But they collectively have an energy far greater than the rest mass of the boson they wish to produce. Then, in a well thought-over manouver, one of the quarks spits out the extra energy in the form of a quantum of electromagnetic radiation. A zeptosecond after, the pair happily merge and a W or Z boson is produced.

Below are shown two Feynman diagrams describing processes by which a W or Z can be produced together with two photons. Apart from knowing that time flows from left to right in these diagrams, while the spatial dimension is exemplified by the displacement of the lines on the vertical axis, you by now are perfectly able to understand what is being described. You can then easily appreciate that each of these diagrams tells a different story!

Coming to the measurement, which is described in detail in the CMS preprint, I think you will not be very interested to knowing exactly the value of cross section that the two phenomena have been found to have. After all, CMS found no needle in the (very small) haystack this time! I will only show one graph from the publication, which details the distribution of the data after some meaningful signal-enriching selection. 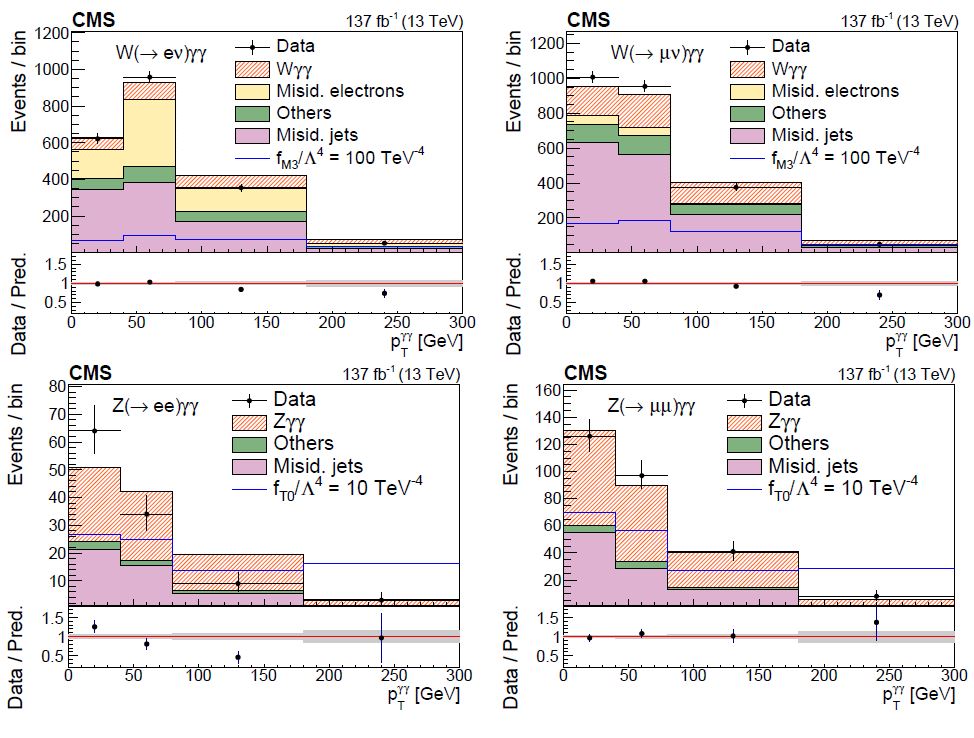 The top row graphs show Wγγ selected data when the W decays to an electron (left) or to a muon (right), and the bottom row Zγγ selected data with decays to electrons (left) or muons (right), as black points in a distribution as a function of the transverse momentum of the photon pair system. Contributing processes are shown by filled histograms. The orange one is the signal component. As you can see from the lower "data over prediction" insets, the data conforms reasonably well to the sum of Standard Model processes; a new physics signal (blue line) might produce excesses of events at high diphoton momentum.