Tommaso Dorigo
That's right - I finally hit the ground with my creativity, and my jokes are starting to use old material for my post titles. Yet producing a pair of Higgs bosons in a proton-proton collision is seriously cool indeed. The Higgs boson in fact is one of the few particles that does a trick called "self-coupling": in a sort of ermaphroditic act it is capable of giving birth to a pair of objects identical to itself.
Self coupling is possible to bosons, particles that carry interactions among matter fields, if they possess the charge of the field of which they are the messengers. Take the photon: it is the quantum of the electromagnetic field, which allows particles to interact thanks to their electric charge. The photon is not electrically charged, so it cannot be the source of a photon itself - hence it cannot emit another photon, and its self coupling is forbidden.

On the other hand, take the gluon: the gluon is the quantum of the strong interaction, QCD. Particles endowed with a color charge (quarks and gluons) can interact by exchanging gluons. As the gluon is color-charged, a gluon may then emit another gluon. It may couple to itself, that is.

The Higgs boson is analogous to the gluon in this respect, but similarities end there. For the Higgs is special in many other ways. For instance, it has zero spin, unlike all other vector fields transporting interactions. And it has a very large mass, unlike gluon and photon which are massless.

Studying the peculiarities of the Higgs bosons we produce in LHC collisions is pretty much as exciting as it can be for a particle physicist today, as there are a number of things we need to check about the behavior of that particle - all of which are predicted very precisely by the Standard Model. Indeed, the Higgs boson was predicted to exist exactly because it was the only way to allow the writing down of a theory that could explain the observed phenomenology of elementary particles. While today the Standard Model is considered not self-consistent, it has been a tremendous achievement to uncover it and to verify its predictions, that all hold water until now.


So the CMS collaboration recently released a new study that looks for the pair production of Higgs bsons, and this is interesting because the rate at which that process takes place is directly related to the strength with which the Higgs self-couple to itself. The reason is that one of the ways you can produce a pair of Higgs bosons in proton-proton collisions is by producing a Higgs boson with much more energy than its rest mass (a virtual Higgs boson, also called "off mass shell"). This "fat" Higgs then splits in two Higgs boson "on mass shell".

The pair production of Higgs bosons has not been seen yet at the LHC, and indeed it is one of the main goals of the high-luminosity upgrade of the machine - it is such a rare process that it takes gazillions of collisions to sort it out. Ok not gazillions, just about a few trillion collisions are needed to produce one single such event, but then we need to collect a handful at the very least if we want to prove we have it.

In the recent past I worked at such an analysis, by searching in CMS data for events containing four b-quark jets. The Higgs boson most frequently decays into a pair of b-quarks, which each produce a jet of hadrons in the final state. So the production of pairs of H particles may be spotted as four independent jets of hadrons, each of them originated by a b-quark. Unfortunately, the signature of four b-jets is not rare enough: strong interactions between quarks and gluons very frequently produce that final state, so sorting out the tiny signal amidst the huge QCD background is a nightmare.

Much more proficuous is to ask that one Higgs boson decays to a b-quark pair, while the other decays to a pair of photons. This pays the price of a reduced signal yield (the probability that the Higgs decays to photons is less than a percent of the probability that it decays to b-quarks) in exchange for a much cleaner, less background-ridden signature. That is what CMS did with the data it collected in Run 2. With it, the sensitivity to the process went up significantly with respect to previous searches.

The search did not produce evidence for a signal yet, but it set a limit on the rate of Higgs pair production. So was it inconclusive? No, because while it has not nailed the Standard Model production of the process, it has indeed reduced considerably the phase space where new physics could modify the rate of H pair production. Below are some Feynman diagrams that
describe how those five parameters would affect Higgs pair production. In the diagrams, time flows from left to right, and you have two gluons coming in and merging, producing two H particles at the end through different processes.

One may, in fact, consider an extended version of the Standard Model, where the Higgs bosons couple with a modified strength with respect to what the model predicts. This may happen if any one of five "effective" parameters has a value different from their Standard Model value. In a paper I wrote with collaborators a few years ago, I proved that the five-dimensional space of these unknown parameters could best be scanned by directing the search to 12 representative points - so-called benchmarks. By searching for the physics that each of those 12 combinations of the unknown new physics parameters would produce, one could most effectively constrain the whole, enormous, five-dimensional parameter space.

I am now very happy to see that our study, which was based on a custom clustering procedure we designed for the task, is regularly cited by Higgs pair production research (it has 69 citations so far), and our benchmarks are the ones used in the searches. Here goes the CMS article in describing this:

"It has been observed in Ref.[27] that when scanning the phase space of the five parameters[...] the distributions of the main kinematic observables cluster in a small number of shapes. Twelve benchmark hypotheses have been defined to describe BSM scenarios with various combinations of EFT parameters [...]"

The CMS analysis is very complex and it would take much more space here to describe it. I feel I cannot pay justice to it so it is better for me to show one of the "money plots" - a graph of the reconstructed mass of the Higgs decay to photon pairs in the selected data sample. A small signal due to single Higgs boson production is certainly present there, although the special selection (that requires the presence of another Higgs decay candidate to b-quark jets) does not allow it to be visible. The fit allows to constrain the contribution from Higgs pair production to a level of less than six times the SM prediction. 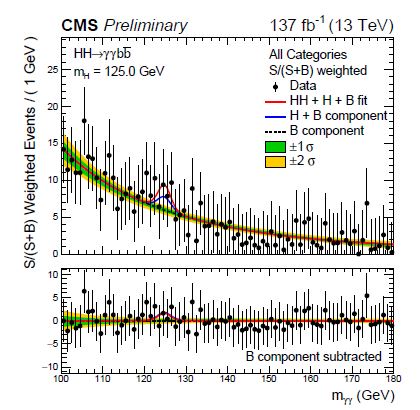 Above, the data (black points with vertical uncertainty bars) are plotted as a function of the reconstructed mass of pairs of observed photons in the upper panel. The model for backgrounds is shown with green and yellow bands, and the background-subtracted distribution (lower panel) allows to see that a signal much larger than the red curve would have stuck up in the distirbution. From that information, an upper limit on the signal process is extracted.

The bottomline of the cited search is that the self-coupling parameter lambda of the Higgs boson potential in the Standard Model has been constrained to be very similar to what the Standard Model predicts (1.0, on the x axis). Or, at least, compatible with it (the confidence intervals goes from -3 to +8, approximately), and incompatible with new physics models that want it much different from that. You can see it in the diagram below: 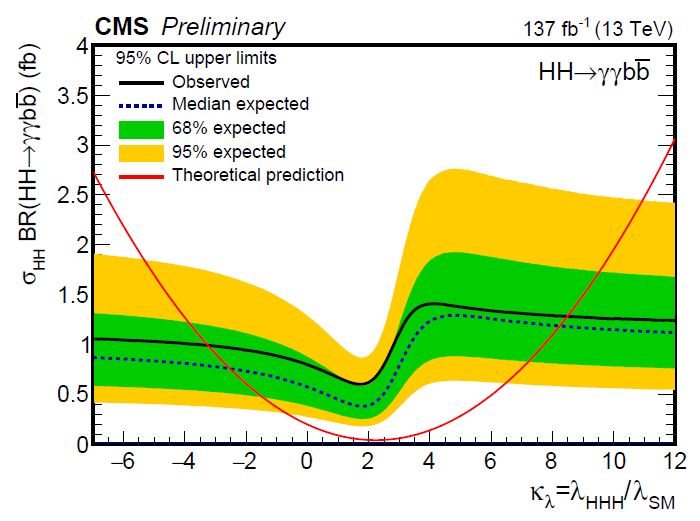 Also quite interesting is to see the upper limits on the pair production cross section for the 12 benchmark models my paper indicated as a reference: 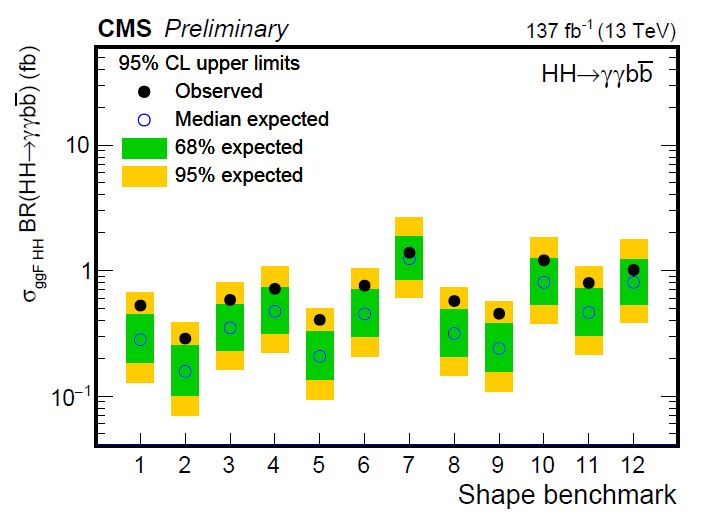 In conclusions: congratulations to CMS for this nice new result, and I am proud of having indicated (with my collaborators Alexandra Carvalho, Florian Goertz, Carlo Gottardo, and Martino dall'Osso) the most effective way to constrain new physics with Higgs pair production!