Tommaso Dorigo
I arrived to Kolymbari, a nice seaside resort on the western coast of the Greek island of Crete, late yesterday night, and am now already immersed in the morning session of the XI edition of the International Conference on New Frontiers in Physics. This event, which takes place at the Orthodox Academy of Crete in Kolymbari since 2012, takes a rather broad view on advances in both experimental results and theory of fundamental physics.
Maybe because of the nice seaside location, or because of the warm and constantly sunny weather this time of the year, the event is quite laid back and this provides for excellent interaction between the participants, which is one of the important elements for a successful scientific gathering. Indeed, by attending this conference in the past I have been able to create a connection with colleagues working on different areas of physics, in some cases opening the chance of further interactions and collaboration.

Later this week I will make a summary of some of the most interesting results I will get to hear in the sessions. For now, I will just show one plot from this morning's discussion of recent top quark mass studies by the CMS experiment.  The top quark is the heaviest elementary particle we know: its rest mass is of about 172 GeV, which corresponds to about 180 proton masses. It is fair to say that although with the Higgs discovery and the proof of its coupling with top quarks we have identified the mechanism by which the top quark "gains" a mass (i.e., there is proof of the existence of a coupling term in the electroweak Lagrangian, which ties the top quark quantum field to the Higgs boson field, and the constant multiplying that term is indeed the top quark mass), the huge size of the top mass remains a mistery to this day.

For the above reason, and because the precise mass of the top quark plays a large role in the phenomenology of theoretical ideas that extend the Standard Model, measuring the top quark mass with the highest possible precision is one very important activity at the Large Hadron Collider. And my experiment, CMS, has done this better than other experiments. The graph below shows how the top quark mass has been measures with a number of different techniques, using larger and larger datasets and a plethora of different final states. The best result is the second from the bottom, a recent feat of CMS. A new world combination of the most precise results is still to be performed. 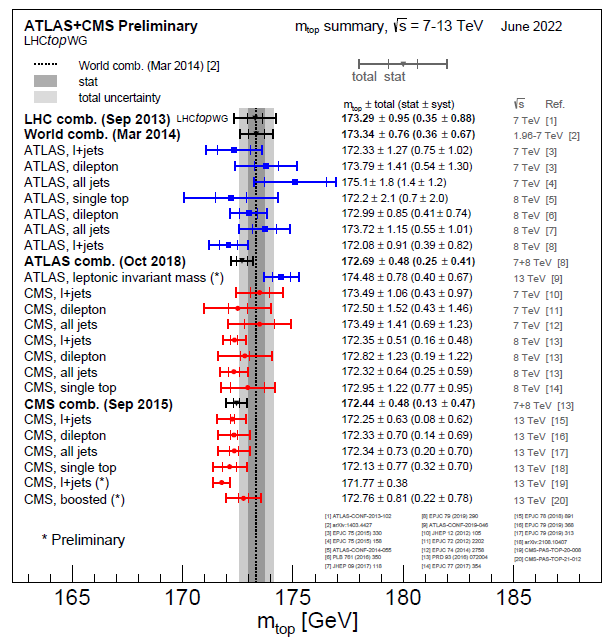 After ICNFP, the second workshop of the MODE collaboration (https://mode-collaboration.github.io), which I coordinate, will take place in the same venue. In that case the focus will be much narrower: we will have three days to discuss how computer science tools offer a way to redefine standards in the design of particle detectors. I will have much more to say about this thriving new field of studies next week.