Home > Science & Society > Welcome to my Moon Base

Chris Rollins
So if you are still unsure whether it's unsafe to drive while talking on a cell phone, come out of your cave.  Multiple recent studies have supported that cell phone use endangers drivers. It seems that every week or so there's a new study out linking increased reaction times to the distraction caused by having a cell phone conversation, often comparing it to other types of impairments such as drinking or listening to the radio. As the research becomes more and more conclusive, scientists have attempted to find comparisons that are relevant than just a number in milliseconds.

Most recently, Dr. Melina Kunar, from the University of Warwick's Department of Psychology, and Dr. Todd Horowitz, from Harvard Medical School, conducted experiments where participants had to perform a task that required their attention (pressing a specific key on a keyboard as discs moved across the screen) as they were holding a conversation with somebody on a speakerphone. Participants who were on the phone, as opposed to a control group, responded an average of 212 milliseconds slower - or, as Kunar put it, approximately 5.7 meters of additional stopping distance for a car traveling 60 miles per hour. Subjects on the speakerphone also made 83% more mistakes than those who had their full concentration on the task.

Forming complex thoughts and speaking them out loud seemed to be the factor that influenced the subjects' reaction times. When listening to the first chapter of Brahm Stoker's Dracula or when simply repeating words that were spoken to them, participants performed the same as if there was no stimulus.

Kunar said, "Our research shows that simply using phones hands free is not enough to eliminate significant impacts on a driver's visual attention. Generating responses for a conversation competes for the brain's resources with other activities which simply cannot run in parallel. This leads to a cognitive "bottleneck" developing in the brain, particularly with the more complicated task of word generation."

Additional research led by Frank Drews at the University of Utah targeted another common myth - that cell phones provide no more distractions than having a conversation with a passenger in the car. In the University of Utah study, participants were asked to use a driving simulator while talking to another person either sitting next to them or in another room. 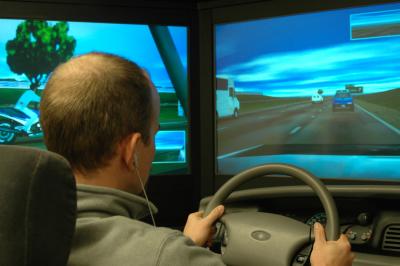 The experiment came to the overarching conclusion that there in fact is a difference in speaking to someone present in the car as opposed to someone on a cell phone. The subjects speaking over cell phone exhibited far worse driving behavior - they drifted in their lanes and were four times as likely to miss the exit they were supposed to take. Speaking with a passenger in the car barely affected driving style at all.

Interestingly, talking on a cell phone while driving also created changes in the way the two people communicated. For instance, when drivers were speaking over a cell phone they tended to spend more time talking - perhaps to avoid the responsibility of processing something their conversation partner was saying.

A different study, published earlier this year by Carnegie Mellon University, showed that just listening to a cell phone can divert essential brain resources from driving. The researchers used fMRI imaging - which can identify which part of the brain is working based on the blood flow to that region - to determine that listening to somebody talk on a cell phone reroutes 37% of their attention away from the parietal lobe, which integrates sensory information and is crucial for safe driving.

Marcel Just, director of the Center for Cognitive Brain Imaging, cites social rules as part of the reason: “Talking on a cell phone has a special social demand, such that not attending to the cell conversation can be interpreted as rude, insulting behavior. The clear implication is that engaging in a demanding conversation could jeopardize judgment and reaction time if an atypical or unusual driving situation arose. Heavy traffic is no place for an involved personal or business discussion, let alone texting.”

Whatever the psychological reasons, the research seems pretty clear: that talking on a cell phone while doing an important task can be very distrac- wait, can you hear me now?
Welcome to my Moon Base
More Articles All Articles
About