Home > Technology > Welcome to my Moon Base

Chris Rollins
In 1970, a Japanese roboticist named Masahiro Mori described what he called the "uncanny valley" - a point on a graph relating human affinity for a machine to its likeness of humans themselves, where human affinity plummets as the likeness becomes nearly indistinguishable from ourselves. As robots become more humanlike, our fondness for them increases.

But when machines reach a point where they look so much like us that we can barely tell they're different from us, Mori postulated that we'll feel repulsed instead of affectionate. Since we haven't been able to produce robots that are nearly indistinguishable from humans yet, it's somewhat difficult to know whether Mori is correct. However, with a new empathetic humanoid robot, researchers at the Bristol Robotics Laboratory in the UK have brought us a step closer to the rim of the uncanny valley.

A graphic representation of the uncanny valley. Notice that if the object moves, the affinity or revulsion caused by the machine becomes much more pronounced. Photo Credit: AndroidScience.

The last decade or so has seen an explosion in the development of humanoid robots. For instance, in 2003 the University of Osaka unveiled Actroid - a lifelike robot modeled after a Japanese woman who was able to understand and respond to 40,000 different phrases in four languages and perform natural movements. The newest version of the Actroid, the DER2, is capable of numerous facial expressions as well. Actroids are now in production and available for rent in Japan, where they are rented by companies for events.

Bristol's Robotics Lab has been working on a similar project. They've just demonstrated a new prototype of a robotic head and face that can produce non-repetitive facial behavior designed to generate empathy by taking cues from the person speaking to it.

"Our particular interest is in how, and to what extent one can achieve the illusion of psychological attending and understanding even though it lacks 'true' intelligence. We aim to find new approaches towards enhancing human-likeness by generating genuine, non-repetitive facial behaviour that conveys a certain underlying emotional state."

The BRL projects that household robots will be ubiquitous in the next 25 years, just as personal computers are today: "It seems very likely that robotic devices will be a pervasive element of our future society; there are many indications that this will be a huge opportunity for life enhancement and commercial exploitation." 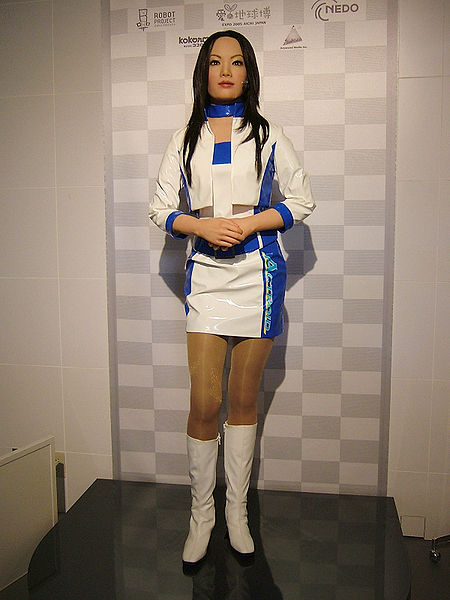 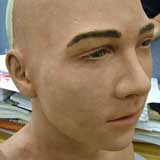 In a future where service robots are used frequently, empathy may turn out to be important in a variety of situations, such as providing companionship for the elderly or as a tour guide. The BRL researchers stress that there is much work to be done before even the illusion of empathy can be accurately created.

"This will require ‘theory of mind’ models as well as dynamic emotional models. We are collaborating with computer graphics specialists who are able to extract ‘characteristic’ features from images and use these to create novel action sequences with qualitatively the same behaviour as the example set." In short, a large part of the challenge is identifying the huge number of complex facial expressions humans make and providing the robot with an accurate framework for identifying and reproducing those expressions.

The researchers are getting close - a video of the prototype contemplating its existence is posted on YouTube, and it shows a machine that's impressively human but still easily distinguishable from a real person.

The BRL also has groups working on creating robots that can make life-like human gestures and can receive tactile feedback, all of which will hopefully be integrated into a complete robot.

Whether any robot will fall into the uncanny valley soon is impossible to determine. We may be decades away from a robot even remotely real enough to inspire the sort of revulsion Miro predicted. On top of that, it's possible that the uncanny valley doesn't even exist since we haven't created machines close enough to reality to test it. Either way, we may never know until the technology gets better.