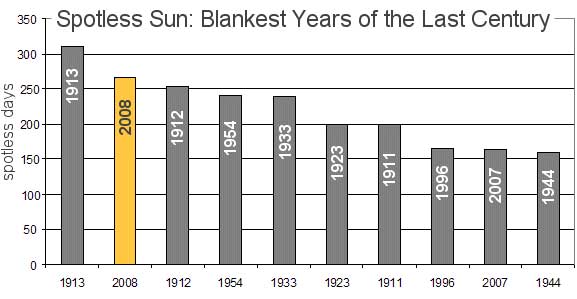 Blankest years of the last century?

I have seen some really good examples of making the data fit the curve,
but this has to be the best ever.  Someone even managed to sneak 2007 and 2008 into the data for last century.

Awesome! Douglas Adams would have been impressed.

... and as the Deep Calm leaped from solar minimum to solar minimum it accidentally leaped into the theoretically lowest minimum possible and was swallowed by the black hole.   The yoga drive continued to oooooooooom serenely.  Emerging into an alternate universe Deep Calm found itself orbiting next to its counterpart Shallow Furious.  That ship was already shaking violently in readiness to dive straight into the Sun, having obviously switched its anger mismanagement drive to maximum.  The Sun was approaching zit maximum and it was obviously a very dangerous place to be ...