A significant ash plume from Iceland is headed to U.K. airspace.

The Irish Aviation Authority (IAA) has informed Irish-based airlines that it will be imposing restriction on all flights in and out of Ireland from 0700hrs local until 1300hrs tomorrow, Tuesday, 4th May 2010 due to risk of ash ingestion in aircraft engines. Ireland falls within the predicted area of ash concentrations that exceed acceptable engine manufacturer tolerance levels.

The plume is much smaller than the recent one which grounded all flights in the region.  It appears to be associated with an abnormal meltwater pulse.

No measurable geophysical changes within the Katla volcano.
http://en.vedur.is/earthquakes-and-volcanism/articles/nr/1884

This is the most recent MODIS/terra image not obscured by cloud: 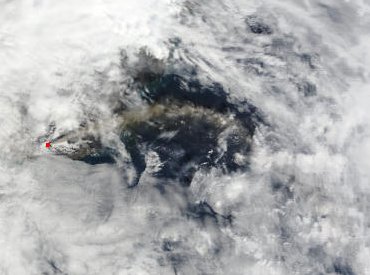 listed below for convenience.