Tweet
Sometimes lies on social media get immediate condemnation and sometimes they are even spread by people who should know better - X is a fascist or even entire science websites are fascists.

How does that happen? Four experiments with participants from Prolific Academic and Amazon Mechanical Turk, published in Psychological Science, provide some insight. The quicker a lie can be made to "go viral" the less blowback due to being unethical it will receive. Seeing a fake-news claim times reduced how unethical participants thought it was and even to share that headline when they saw it again—even if it was clearly labeled as false and they disbelieved it.

This is how the anti - #GMO crank blog network functions. They all incestuously repost each other's nonsense. So it looks like more. https://t.co/NaprxmytFZ

So an anti-science activist working for a supplement or organic food trade group simply gets a friend of theirs who is an SEO expert (at Gizmodo, or pick some other site where their science bloggers are hired because they are SEO experts) with a following to spread a lie and after it gets retweeted from this paid influencer enough, people who know better are less inclined to take an ethical stand against it. And they will even retweet it. And even join in, without ever thinking critically about the people they are helping. 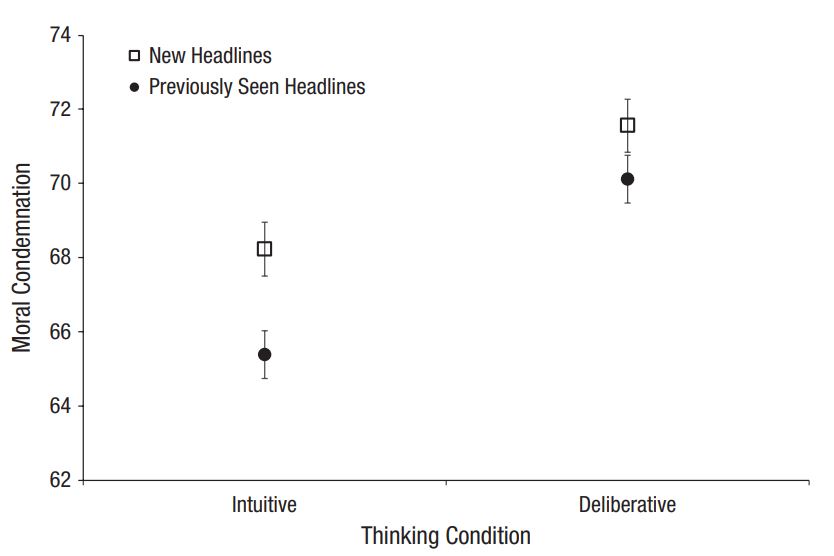 Mean moral-condemnation rating in Experiment 3 as a function of thinking condition and headline type. Moral-condemnation ratings were made on a scale from 0 to 100, with higher numbers indicating greater moral condemnation. Error bars show withinparticipants 95% confidence intervals (CIs), calculated using the Cousineau-Morey method, around raw means. These error bars facilitate visualization of significant differences among the within-participants condition (i.e., new vs. previously seen headlines) by removing between-participants variance. Thus, they should not be used to make inferences about the between-participants manipulation (i.e., thinking condition). The 95% CIs reported in the Results section are between participants. Credit: DOI: 10.1177/0956797619887896

"We speculate that repeating blatant misinformation may reduce the moral condemnation it receives by making it feel intuitively true," they write.

It's not speculation, it's right there on Twitter, evidence shows people with a psychopathology against science dominate social media.