Tweet
Is Senator Elizabeth Warren a Native American, as she routinely claimed she was when it helped her career? Actually, sure, in a world where anyone can identify any way they want it is logically (and increasingly legally) difficult to tell someone they can't feel like part of a group, especially if the history is limited to stories and scant archeology.(1)

If you are an academic in Colorado or Canada who got the boot because you get labeled as "Pretendian" your dismissal might have been impacted by how much social media attention your detractors got. There are no set criteria on being 'native' because Native Americans wisely avoid genealogy, much less biology, tests. Biologically, there are no true natives and have not been for hundreds of years.(2) It is primarily in-group-identification, but more recently it became big money economics, and that makes identity political.

A hundred years after the American Revolution, and certainly after the many lies and criminal acts by the federal government toward the over 500 tribes that remained, many natives were put up for adoption. They were going to 'have a better life' was the rationale.(3) My great-grandmother was one of them. Her son, and then my father, absolutely looked Native American, whereas I do not. Can I identify as a Native American? Sure, I have the 'blood quantum' - until a blogger at Mother Jones or some dark-money funded website decides to help their friends in the organic industry and get me canceled.(4)

Then I would have to defend it and they would have to say my identification is fraudulent after declaring Senator Warren legitimate. They can flip-flop without guilt because the issue is not scientific. And many natives will be on their side when it comes to moving the goalposts. The lead defenders of 'black box' secret sauce determinations of native identity are native groups. Their political/financial interests, dressed up as tribal authority, are even used to keep native kids from being adopted by "white" people, which is racial discrimination in American law.

Nothing exemplifies the arbitrary nature of tribal identity like arguably the most famous native of the last 50 years.

Sacheen Littlefeather was born Marie Louise Cruz. She became a model (she also won the bizarre yet unsurprisingly very 1970s-ish Miss American Vampire contest(5)) and Native American rights activist who shot to fame after actor Marlon Brando refused to accept an Academy Award for "The Godfather" in 1973 and she did in his place. It was not common knowledge until her death in 2022 that some natives never thought she was 'real.' She claimed her father was of Apache and Yaqui ancestry but her siblings said their father was Mexican. Obviously lots of Mexicans had native ancestors, they were also cowboys before the United States even existed, but that she is dismissed from Native American identification because her father was born in Mexico speaks to the subjective nature of it all.

During her life, her fame made her a valuable ally, but after her death there was backlash and then the inevitable counter-backlash. (6) 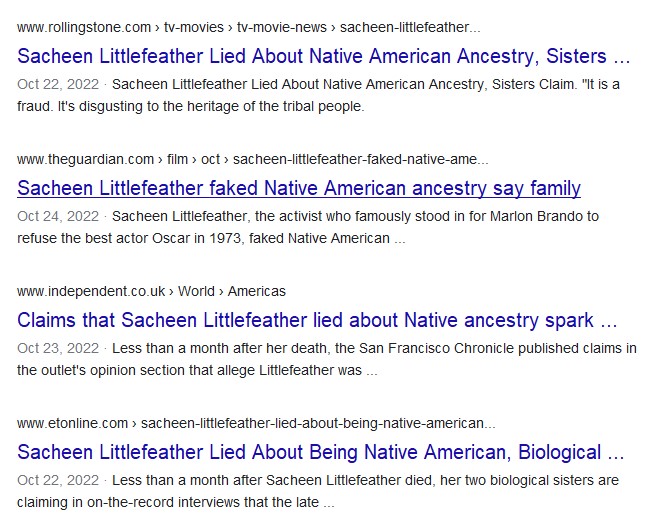 That is how we get to the arcane interpretations of identity.(7) Some argue that having known ties to a tribe, much less "blood quantum" amounts, is too restrictive. Adoptions are often sealed so my great-grandmother might not be able to 'prove' she was born into the Seneca of the Iroquois nation.  Being a "squaw" 100 years ago was not a benefit so her family and she had no reason to lie about it. Even if you were not adopted, what if 100 years ago you didn't want to be known as a native to avoid discrimination so it never got passed down? What if you never adopted any sort of hyphenated nationality? Am I Native-American by now, or Scottish-American, or both? Or just American?

“It’s what you feel in your heart, and what your belief system is,”  asserted a friend of Littlefeather's who identifies as a Shoshone poet named nila northsun.

That all sounds too capricious but at its core it's as legitimate as lots of other identity issues in 2022.

There are certain to be some in leadership positions of the groups that own casinos who have just as little actual standing as Littlefeather - or as much or as little as me. She was both embraced and then targeted because of her prominence in culture. Critic Jacqueline Keeler, who claims to be Navajo, wrote, "A U.S. citizen of distant French descent does not get to claim French citizenship. And it would be absurd for that person to wear a beret on stage at the Oscars and speak on behalf of the nation of France.”

Given that criteria, no one can be Native American if they were born in the last two centuries, just like people in Quebec are not French even though they share language and culture and were once French. Europeans long ago agonized over the "No true Scotsman" fallacy but some Native Americans are still picking positions and moving goalposts as needed.

Littlefeather's legacy should not be a weapon in their war on people who are not connected insiders but her situation shows that some of this also needs to be fixed in law if it is harming families. What if she had been adopted? Would she be more or less native?

The Supreme Court is looking at a challenge to  the Indian Child Welfare Act of 1978, which bans white people from adopting native children - it is being challenged on the grounds that it is discrimination, as noted in (3) - but against any change are native tribes. Not because it is better for children, but because any challenge to their sovereignty, regardless of the welfare of children, is regarded as a slippery slope to having American FBI agents investigating all those abuses and deaths of native women on tribal land that people talk about but never gets publicity because tribes let it go.

If this 1970s law is undone on discrimination grounds, the way the Supreme Court undid a 1970s college admissions secret sauce that penalized Asian students, will adopted kids be considered Native Americans or not in the future? As is often the case, old people want to hold on to their power so maybe not. But young people recognize that the power is in numbers, and the larger the voting bloc you have the better. Natives may look at the power of Latinos in elections now and be okay if people in Brooklyn whose great-grandparents moved off the reservation still call themselves native the way descendants of Puerto Ricans do.

And it may be a non-issue. Tribes knew this was coming eventually so 10 states where tribes exercise a lot of power (read: money) already have their own form of ICWA. Children in those states might have no better chance at a diverse family than they do now. How you feel about a 'white' family adopting a native child versus someone who claims a shared heritage is entirely subjective, much like how you identify.

(1) Yet we do, and not just for natives. A woman who was a staunch advocate for African-Americans was excoriated because she claimed to be black, but it turned out was not. That's a big switch from 50 years ago when Muhammad Ali was criticizing opponents for being too dark. And lauding the Democratic Governor and avowed segregationist George Wallace. She wasn't black enough.

(2) In the classic novel "The Last of the Mohicans", the last Mohican was the nephew of Uncas, because the elders in the tribe knew everyone then and there were no pure native women for him to marry. That was set before the Revolutionary War.

(3) The Indian Child Welfare Act of 1978 sought to reverse that trend so instead made discrimination into law, by penalizing adoption of an "Indian child" by non-Indian adoptive families. Critics say it isn't just discrimination, it led to kids not having the lives they might have had, and put the rights of tribal special interests ahead of the rights of children. It is being challenged at SCOTUS again this year.

(4) I would not anyway, because Generation X had to straddle 'melting pot' culture - we're all one people so we were supposed to enjoy music by black artists - that switched to 'salad bowl' culture - we're all separate ingredients so if you enjoy music by black artists but are white and get recorded singing along to anything except the 'White Person Lyrics' version of Lotto's "Big Energy", you'll get canceled. The only thing Generation X will identify as despite lacking a reason to do so is Irish and Italian. Those countries don't seem to mind letting Americans have some fun pretending.

What makes her beliefs more complex is that she was a diagnosed schizophrenic who also claimed to have been at the takeover of Alcatraz, and that last part also was not true. But her illness makes her later claim that John Wayne tried to assault her after her speech at the Academy Awards understandable. It was never credible given all of the people there who saw nothing of the kind.

(6) You can always count on the Washington Post to stay on point, noting that if she did not profit from the lie, it isn't the ethnic fraud Native American advocates say it was. Yet she clearly did profit from her claims about ancestry, because those were what got her the Oscars speech she traded on for the rest of her life.

(7) And the psychology of activism. Just like Katie Couric edited parts of her Ruth Bader Ginsburg so the Supreme Court Justice did not explicitly say things Couric did not want her to have said, many ignored the reality of Littlefeather. Dina Gilio-Whitaker, a lecturer of American Indian studies at California State University at San Marcos and "certified" descendant of the Colville Confederated Tribes in Washington, wrote, “In Indian Country, we don’t have a lot of heroes. And so when we do have them, we tend to hold on to them, and take for granted that they are who they say they are.”