Erin Richards
HIV/AIDS has left its mark on mankind.   Millions of people have been lost to a disease that seems so uniquely designed to tear down our defenses and ruin us, the Barbarians to our Roman Empire. An almost unrivaled effort in the scientific community has been bent on cracking the code of HIV since the 1980’s, and although we have discovered much about the virus, and its action inside the body, we have yet to develop a vaccine or adequate long term treatment.

The difficulty with HIV is multifaceted, but there are a few that hinder our progress most significantly. HIV is a rapidly mutating virus, and therefore there are countless strains of HIV which makes one vaccine, with broad action protection, nearly impossible to formulate.

Previous attempts at making an HIV vaccine have targeted the immune system, aiming to produce certain antibodies or killer cells that would eliminate the virus before it has a chance to infect cells. However there have been countless clinical trials to test new methods, they have had limited positive results. HIV vaccines developed in this manner fail to elicit protective immune measures, and the results are much the same for infection without any vaccine influence.

But despite the hurdles, science has gotten closer to figuring out the key to an HIV vaccine and at the center:  gene transfer.

Using gene transfer techniques, researchers at the Children’s Hospital of Philadelphia were able to bypass the natural immune system (and the target of infection for HIV) produce molecules that block infection. Using this technique, scientists were able to prevent infection in rhesus monkeys with SIV, (simian immunodeficiency virus) which causes AIDS in monkeys and is closely related to HIV. 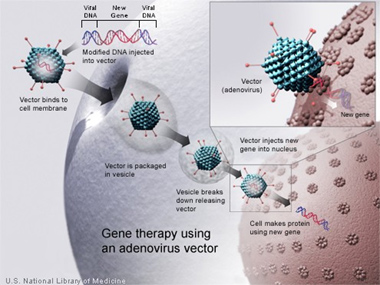 This image shows gene therapy, much like the technique used in this study, using an adenovirus. DNA for a certain protein or other substance is placed within the adenovirus and then the adenovirus is injected into the subject. The virus infects cells with the desired DNA, and the cells start producing the DNA that was previously contained within the adenovirus. This has benefits for treatment of a wide range of diseases, both infectious and autoimmune. Photo credit: U.S. National Library of Medicine

Author and lead investigator of the study Philip R. Johnson, M.D., chief scientific officer at The Children's Hospital of Philadelphia described the focus of the study as using, “ a leapfrog strategy, bypassing the natural immune system response that was the target of all previous HIV and SIV vaccine candidates.” Johnson developed this approach over a ten-year period, collaborating with K. Reed Clark, Ph.D., a molecular virologist at Nationwide Children's Hospital in Columbus, Ohio. The study was published May 17th in the online edition of Nature Medicine.

Johnson and colleagues split the approach of the study into two phases. During the first phase, they created proteins that acted as antibodies, called immunoadhesins that specifically bind to SIV. The bound grouping of immunoadhesins and SIV virus effectively prevented the virus from entering, infecting cells and reproducing. After proving this effect in the laboratory, DNA that represented the SIV binding immunoadhesins was engineered into a carrier virus and given to the monkeys. Researchers used an adeno-associated virus as their carrier due to the effective DNA delivery anticipated with inoculation.

The second phase began a month after inoculation with the SIV immunoadhesin DNA, the monkeys were injected with live, virulent, SIV. Results showed that the majority of the immunized monkeys were completely protected from the SIV infection, and all were protected from AIDS. Conversely, in the control group, all of the unimmunized monkeys were infected with SIV and two thirds suffered fatal AIDS complications. Researchers reported high concentrations of the SIV-specific immunoadhesins in the blood for over a year after initial immunization.

Even though this study shows promising results, Johnson cautions that many hurdles still need to be overcome before this technique can lead to a human vaccine for HIV.  "To ultimately succeed, more and better molecules that work against HIV, including human monoclonal antibodies will be needed," concluded Johnson. He also acknowledges that this gene-transfer technique may also offer prevention for other infectious diseases such as malaria.