Although the inactive volcano may not seem to resemble the moon, Mauna Kea does provide a similar environment to field test the robot for a mission to the moon. Mauna Kea has rocky slopes and, due to its elevation, cold temperatures. Mauna Kea is a paradise to many a migrating astronomer and, with its 14,000-foot summit, is often covered in snow. NASA will field test Scarab at 9,000 feet, where it will encounter rain, fog and daily temperatures of 40 degrees.

The four-wheeled Scarab will travel to different sites and obtain geologic core samples by drilling; the samples will be tested by on-board instruments to determine a chemical analysis of the sample. This allows Scarab to evaluate the site for possible mining of materials. 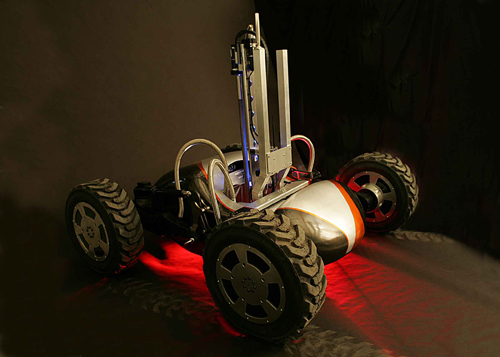 During the first two weeks of November, researchers from Carnegie Mellon University’s Robotics Institute, NASA and other organizations will field test Scarab to examine its capabilities to extract useful elements from the surrounding environment. It will collect water, hydrogen and oxygen along with other necessary elements to sustain missions to the moon for prolonged periods of time.

Upon Scarab rests the hopes of NASA that this will usher in a new era of space investigation, one where sustainable materials are gathered from the environment instead of brought on board the space shuttle. Professor William Whittaker, director of the Robotics Institute’s Field Robotics Center is one of these hopefuls. “The technology being developed for Scarab will help locate whatever water or resources might exist on the moon as we seek out the raw materials for a new age of exploration,” notes Whittaker.

Scarab, designed for NASA’s Human Robot Systems program run by Carnegie Mellon, serves as a prototype for technologies that are proposed for exploration of the moon’s southern pole. In this extreme environment, the robot must be able to operate functionally with no light and in harsh temperatures of minus 385 degrees F. Scarab has many advanced features including rocker-arm suspension, allowing the robot to navigate through rough, rocky and otherwise unpredictable terrain with little challenge. It is outfitted with drill assembly developed by Northern Centre for Advanced Technology (Norcat) from Ontario, Canada. The drill cuts out a one-meter sample and then crushes it using another Norcat device, preparing it for analysis. The Scarab, despite its 880 pounds of weight, can operate on a mere 100 watts of power.

“Last year, we demonstrated Scarab’s unique maneuverability and its ability to navigate autonomously,” says project leader and associate research professor David Wettergreen explain some of Scarab’s technology advances. “This year, we reconfigured Scarab to accommodate a rock sample analysis payload developed by NASA. Now it is a complete robotic system for exploring the lunar poles and prospecting for resources.”

Although NASA may not have any immediate plans for an upcoming mission to the moon, the success of Scarab provides the technology needed for possible long term missions to the moon and beyond.

I wouldn’t start packing my bags for a vacation to Mars just yet, but with the ability to harvest materials from alien environments, many significant obstacles can be overcome and expound our limits to explore the stars.
Erin's Spin
More Articles All Articles
About