Yet leading the world in science literacy needs under 30% of its people, so it isn't that America is great, it is more that other countries are terrible. Anyone looking at the science policies of Europe - 'anything but science' is the default - when it comes to food, energy, and medicine knows they're regressing into the Dark Ages. Asia never stopped being the home of supplements and mysticism, it is why they lead the world in endangered-species-killed-for-folk-medicine occurrences.

Yet America wants to engage in American Exceptionalism even about anti-science positions. England began the modern anti-vaccine and anti-GMO movements, for example, but America made those beliefs dominant among wealthy elites, despite America being the home of molecular biology and most vaccines.

That is why a new study showing that the US leads four other English-speaking nations (UK, Canada, Australia, New Zealand) in misinformation when it comes to COVID-19 is no surprise. It is also no surprise America leads in flagging misinformation - from their political opposition.

It is not much of a surprise because America produced the most scientific content that turned out to be wrong - in one month in 2020 there were 9,000 science articles on SARS-CoV-2. From claims about treatments that turned out to be invalid to claims about cause and effect, nearly everyone had a 'scientific' paper to support any belief. Because what else does the US lead the world in? Epidemiology. Correlation. Linking some cause in a giant pool of people to some food or medicine in a giant pool of data and declaring it science if they can declare statistical significance. (1)

In business, the easiest way to find out the flaws in your product is to ask a competitor. They'll tell you everything wrong with your stuff, and that is why the US was also at the top in flagging misinformation from others. Science in modern times is overtly political, and has been since government began to dominate science funding 50 years ago. That desire to make everything political is evidenced by the political change in anti-science issues. For 20 years, the left dominated the anti-vaccine movement but now the right does.(2)

Everyone can see the flaws in critical thinking for people they oppose. Obviously, some people share misinformation to criticize it - Canadians led the group in claiming they spread misinformation in order to debunk it. Most just share it because it matches their world view, and they hide behind a veil of wanting to save science from itself, like Paul Feyerabend and all the icky postmodernists who are even worse now. The weakness in the whole exercise is that these were surveys, and very few people admit they deny science on surveys, which is why when California had more vaccine exemptions than the rest of the US combined, defenders of the Democratic party in academia trotted out surveys showing that denial was about the same in both camps.(3)

The data used were nationally-representative surveys conducted in each country in July 2020 and January 2021. 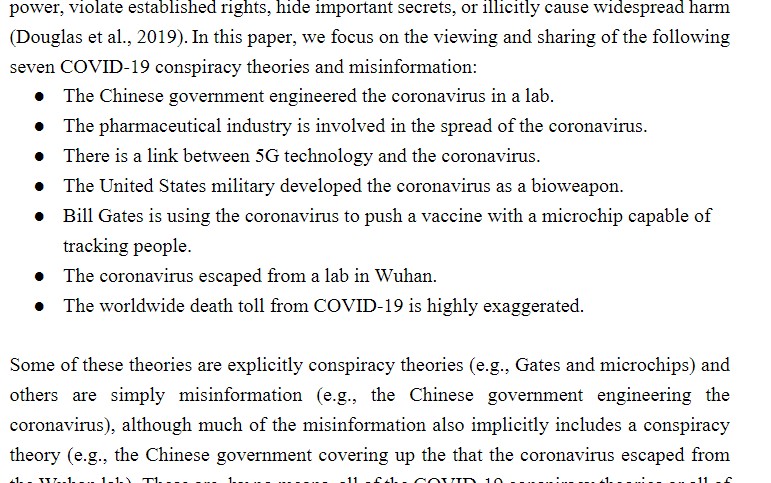 What is interesting is that while the authors targeted "conservative" thinking in the broad way people identify (much like a lot on the left will use "progressive" even though they are not), you could have done this three years ago and used "liberal" and distrust of government and it has the same air of truthiness. Left-wing activists are always going on about how FDA and EPA are in the pocket of corporations. They insist that lobbyists tell scientists what to think - no differently than conspiracy tales the right has spun about the COVID-19 vaccines, only with less evidence. While heart issues (that wouldn't have happened anyway) due to the vaccines are rare, they exist, whereas health issues related to GMO foods and natural gas are entirely manufactured.

The authors do recognize it is not a breezy one-side-is-wrong issue, or they wouldn't have included topics that are left-wing hot buttons too, like Bill Gates, the evil military, or 5G cell phones.(4)

Both sides don't distrust the government at various times, which means they don't trust scientists, but while I don't agree scientists are the problem, with the disinformation and misinformation promoted by CDC in the last 15 years, no one is wrong for worrying that government appointees overseeing scientists have an agenda that has little to do with public health.


(1) You can correlate anything to anything, if you try. You can even declare that coin flips are prejudiced against heads with statistical significance. Or tails. The same way you can claim meat causes cancer. Or prevents it. Or that conventional pesticides used on a farm 2 miles from your house cause autism. Or organic pesticides. Harvard School of Public Health and the taxpayer-funded National Institute of Environmental Health Sciences have wrecked trust in epidemiology by engaging in overt ideological wars and wrapping it in a flag of science.

(2) The left still thinks agriculture is a corporate conspiracy, progressive stalwarts like Marion Nestle repeated their out-of-touch claims again this past month, and the left killed the nuclear energy industry in America while right still dominates in noting misinformation about climate change while pushing their own.

(3) Organic food activists and environmentalists in a war on natural gas also don't admit they deny the science on surveys, because they instead rationalize that everything except their pet cause needs more testing and is not economically viable.

(4) That the virus was engineering in a Chinese lab and escaped is still circumstantial, but the Chinese government went out of their way to remove their coronavirus database, sandblast both Wuhan labs working on coronavirus and the Wuhan wet market, and stall for 9 months before only allowing a UN Chinese sympathizer to lead a UN group which spent 4 hours in the now-clean lab before nodding along with China who tried to claim that Americans probably sent it worldwide in their capitalist frozen food.

No one rational thinks it was intentional, though. Instead, anyone who knows government-controlled science in China assumes they were both sloppy and incompetent.
Science 2.0
More Articles All Articles
About