Hank Campbell
String Theory, stem cells, epigenetics, antioxidants, they've all been important basic research that got exaggerated beyond recognition, which got media attention, which got people rushing into the fields and led to even more papers making increasingly cosmic claims until the public stopped believing any of the hype, which is where they should have been all along.

Make way for the microbiome. What was once a goofy yogurt claim - as if your trillions of bacteria were going to be impacted by a half cup of overpriced dairy goop - became mainstream supplement gold.

Though someone dying from a fecal transplant doesn't help its credibility there is real value in understanding the thousand different bacteria species that colonize our bodies, especially when it comes to antibiotic-resistant Clostridium difficile infection or an immune system devastated by cancer treatment. While that happens we will get a lot of nonsense, like yogurt as medicine. Yogurt as medicine is ridiculous unless you like it or it makes you feel better the way placebos do for 29 percent of people, because it's a blanket supplement for a biological landscape no two people share. Our microbiomes are as unique as each snowflake.

But if athletes wearing certain outfits can cause an uptick in clothing sales, or nasal breathing strips, or cupping, why not examine their microbiota to see if elite fitness is evident beyond more than genetics? And then maybe sell some stuff using fuzzy-wuzzy "omics" nomenclature.

Those are both part of the goal in a recent paper touting how performance-enhancing bacteria may lead to better athletic results.

I'll save you time and money and tell you to ignore nonsense claims about performance-enhancing probiotics that Jonathan Scheiman, Ph.D. just happens to be interested in selling for his company.  The reason to not get excited is because that benefit is only in mice. Next to epidemiological correlation, mouse studies are the most abused papers in science culture. They are only exploratory so they can never show anything in humans, they can only disqualify effects. For context, cancer has been caused 100 million times in mice and cured a thousand times but there is still no cancer cure on the market - you can't sell a drug using only mice studies. They are not little people, any more than statistical correlation is.

But in a paper all you have to do is note the same bacteria are higher in athletes and make a picture and let people draw their own conclusions about whether or not to buy stuff. 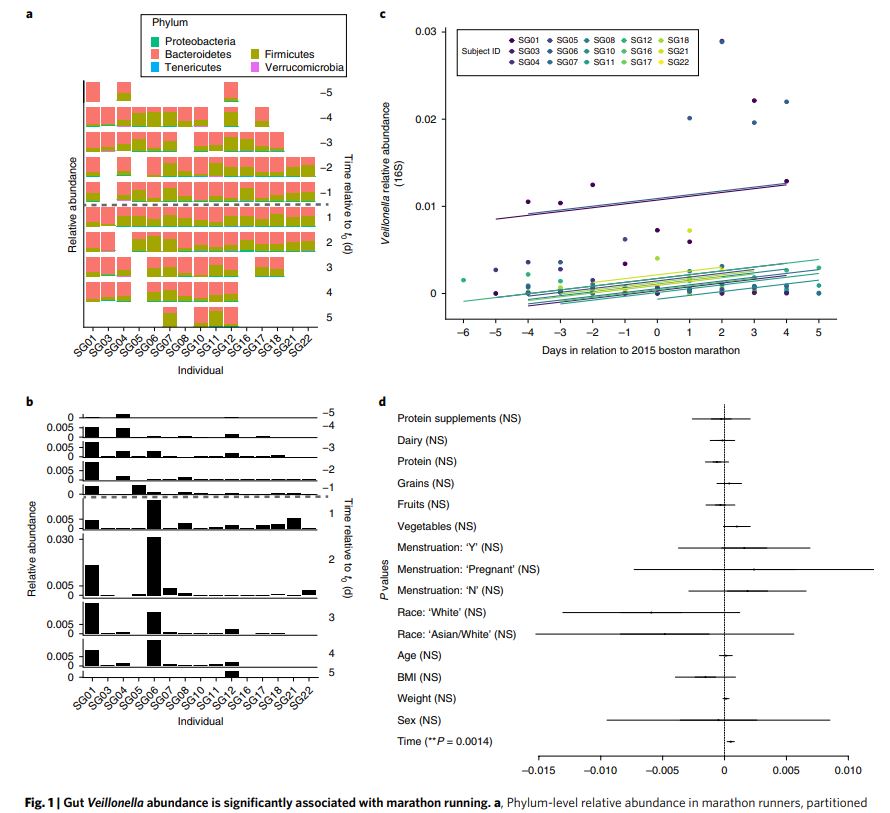 You can sell a supplement using anecdotes or mice studies or epidemiology. All you have to do is note that FDA had nothing to do with your claims about supernatural benefit and it's right to the GNC and Whole Foods aisle for you.

Disclaimers about hype aside, the recent study about Veillonella bacteria is worth discussing. They note Veillonella atypica was enriched in the microbiomes of Boston Marathon runners after finishing and when they isolated it and gave it to mice their performances in laboratory treadmill tests by 13 percent compared to controls.

The authors believe the mice bodies became more resilient because the bacteria caused better breakdown of lactate. We've all experienced a burning sensation during strenuous activity and that is linked with "lactic acid" buildup. It is our body's natural defense mechanism letting us know we are working hard. Lactate is lactic acid missing a proton but they are used interchangeably. Pedants will criticize that, but it's fine colloquially. In science literacy, there are much bigger problems to solve, hyped mouse studies and epidemiology being the two big ones.

They also suggest it boosts the body's ability to produce the short chain fatty acid propionate. "Suggest" is the worst word in science because it has a meaning to insiders that is far different to the public. To scientists, it means "maybe, but we'll need to do some science" while to the public it is causal. So activists will claim a mouse study of BPA "suggests" it could be an endocrine disruptor in humans, but that has never actually been shows to be true. They just keep doing mouse studies, and doing statistical correlation ('people in a radius around a ConAgra plant in 2004 had three IVF more treatments than in other places') and trotting out the same stuff.

So even though it isn't human science, athletes may still embrace this, because athletes are dealing in a world of millisecond responses over competitors who are also world-class in their fields - and it's worth a try even if they are in the 29 percent that is duped by placebos.

At least they won't get pseudo-frostbite from cryogenic therapy - another unvalidated fad that took off in the sports arena based on a kernel of biological reality.
Science 2.0
More Articles All Articles
About