Hank Campbell
Two years ago we were helping my mother-in-law get settled into her new place and, with the manual labor done and my usefulness diminished, she and her daughters talked details and I sat in a chair. A Hallmark movie was on. I had never seen it before but I was convinced I had.

After about 10 minutes, when a seemingly avoidable misunderstanding occurred onscreen, I began taking notes on my phone and talking about the action. My family asked what I was doing and I declared that this was brilliant storytelling. This formula could work with anything, it was that rock solid.

I was reminded of that when I mentioned on Twitter that I had been ejected from the family room for the first time this holiday season - for objecting when the female doctor "prescribed" supplements to cure stress in the Guy Who Must Be Santa.

I am willing to suspend disbelief about Santa, but not that any legitimate doctor would prescribe supplements for stress.  Cameron J. English, Senior Editor at Genetics Literacy Project, replied with his go-to resource for all things Hallmark plot, a random Hallmark Channel plot generator by Kelli O'Neill on Odyssey.

Intrigued, I went to random.org and used their random number generator for each of the categories O'Neill laid out and then wrote my synopsis on Facebook. It was a woman who has an ice skating accident ends up in the hospital with the guy who is all wrong but will eventually be oh-so-right.

That sounded okay but my original idea was to make a Hallmark plot into a sword and sorcery adventure, like Conan, but if I am going to sell this to studio executives at Paramount. They have to be worried about their jobs after another disastrous year and no "Mission: Impossible" sequel to make things look far less awful, so this has to be safe. And cop movies are safe in 2019. So my idea instead became Hallmark CSI.

Here is what the random number generator gave me to work with. A (1 - Sassy) female (13 - Veterinarian) is unhappy because (16 - she is being forced to spearhead a project alongside someone else, when she always works alone.) Everything changes when she meets a (3- Nerdy) male (7- assigned to the same work task she is, whose ideas conflict with her own) while they’re (14 -both targeted by the neighborhood snowball-throwing kids, and team up to take them down.) Through crazy circumstances and with a little help from (4 - a mysterious bearded stranger with a twinkle in his eye) she soon discovers (8 - that sometimes the life you always dreamed of isn’t the life you truly needed.)

Challenge accepted. Parts of it were a little clunky right out of the random generator so I made it flow a little better for Paramount people with checkbooks.

Here is what I came up with for my Hallmark CSI film:

A wisecracking loner detective is forced to team up with a nerdy veterinarian who's never held a gun when they are both targeted by a well-connected criminal. Little do they know that the original suspect, a mysterious bearded stranger with a twinkle in his eye, has a bigger plan for them this holiday; to show them the case they always always dreamed of goes much higher up into the halls of government than they ever would have imagined.

My cast: "I know I have seen her in something" and "I think he was the Batman with the nipples" who are actually Elsa Pataky, kicking butt in two films in the "Fast  &  Furious" franchise, and Brandon Routh, who was a good Superman in "Superman Returns", Bryan Singer's otherwise questionable take on the character. 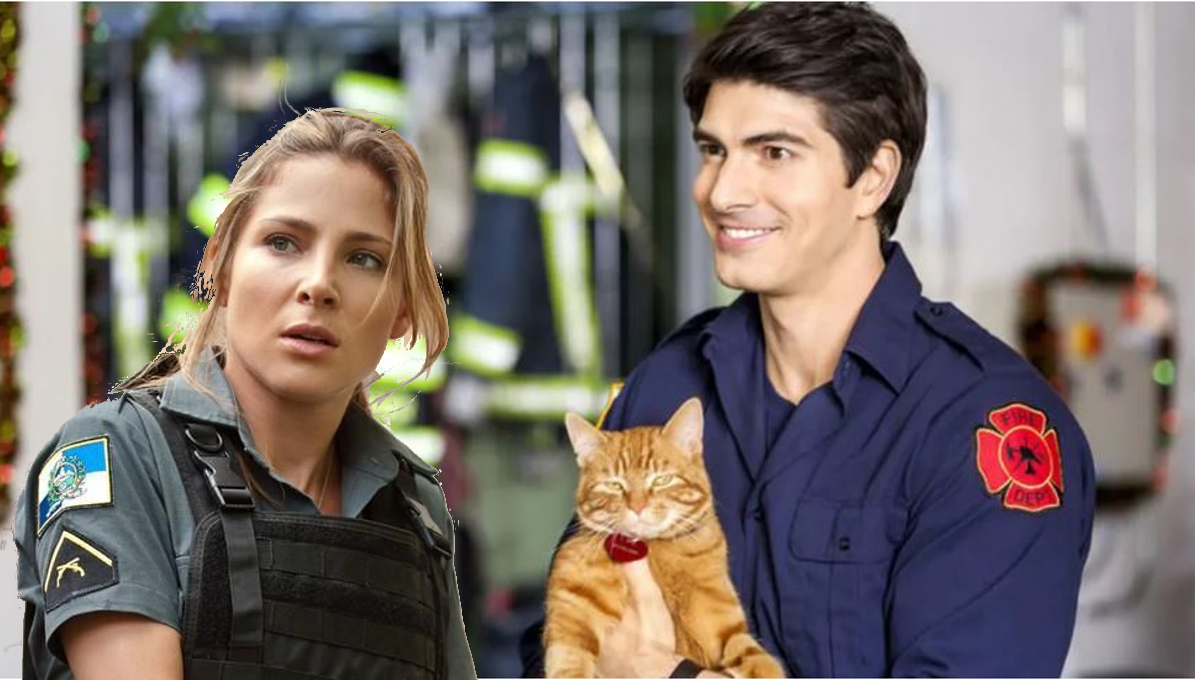 The left image is from an homage to badass women in film on Pinterest while the right is from actually good "The Nine Lives of Christmas", where he is not a veterinarian, he is a fireman, but he holds a cat. Image mashup via GNU Image Manipulation Program

It really just took changing a few words. In the Hallmark Christmas movie generator a 3 for characteristic was "sassy", but since this is a police action movie, I tried to think of a term they would use for a cop movie, and came up with "wisecracking", because that sounds like an adjective an aging Hollywood producer would like.

Hollywood loves to make veterinarians female but since this is my Hallmark CSI I changed the woman into the cop and the man into the animal doctor. I am not sure that is what the actual Hallmark audience wants and Paramount doesn't care what activists on Twitter say women should want in their movies so they can change those back after the check clears. The man can be the veterinarian, because it is still a career everyone thinks they understand as background, without making that essential to the plot. It is like the vague fine craftsman in the small town that will get the girl or the big city Lord Business executive about to lose her.

No one needs another "Krampus" knockoff so this Santa will definitely be a good guy, the deus ex machina that will keep the plot moving, twists will include peril that occurs when the nerdy veterinarian ignores her directive to stay behind cover and instead chooses to rescue an animal; an animal that happens to hold the key to the whole thing, in his collar. Our Can-He-Really-Be-Santa will be a business owner set up by the conspiracy because he has motive - his small business appears to be failing - but he will be in surprisingly good spirits despite Amazon Prime. The final battle will occur in a toy factory and just when things are at their darkest, a mysterious streak in the air that looks like a sled and eight tiny reindeer will knock over boxes of toys and take down the gang, at which point it's revealed that the mastermind was the deputy mayor, who was using crime to get the obstacle on his career path impeached. We want to stay ripped-from-today's-headlines topical.

Clearly there are holes, and I haven't spent a lot of time filling them because Science 2.0 donors want exactly $0 to go toward my film treatments, but if you have ways to improve it, please leave a comment.
Science 2.0
More Articles All Articles
About