Organic Consumers Association And Joe Mercola Have A COVID-19 Conspiracy Theory - The Wealthy Got China To Do It
By Hank Campbell | February 25th 2021 01:07 PM | Print | E-mail

Hank Campbell
For much of 2020, it looked like media was trying to pivot the anti-vaccine movement from being predominantly left wing to one afflicting right. More right-wing people than left in America didn't want to wear masks, after all, so it seemed easy to claim they would be less likely to take a vaccine.

It didn't really work and the organic industry is not willing to give up the fight to be anti-vaccine that easily. Ronnie Cummins, conspiracy theorist and head of Organic Consumers Association, has teamed up with osteopath and supplement huckster Joe Mercola, D.O, to assure their base that science is still a vast right-wing conspiracy...and if you want to "fight back for our health, democracy, and freedom" you need to give them money, and then buy supplements and organic food real soon.

Organic shoppers have long had a distrust of science - they wouldn't buy Non-GMO Project cat litter if they understood anything about genetics - and the same demographic of rich coastal elites has been the heart of the anti-vaccine movement.  In California, we had to pass a law banning arbitrary vaccine denial for kids because there were elementary schools on the coast with under 30 percent vaccinates children - and dangerous diseases had mini-epidemics.

There is so much overlap among the organic industry and the anti-vaccine movement that just two short years ago Organic Consumers Association was hosting anti-vax lawyer Robert F. Kennedy, Jr. to assure their base that getting rid of cell phones and regular food will...prevent polio or something.

They must be worried that if their customers start to believe scientific reality about vaccines they will lose confidence in organic food and supplements as well, because they have a new book - available on Amazon, of course, at a time when most companies are disavowing anti-vaccine beliefs - claiming that COVID-19 was designed to make the rich (Bill Gates, the Koch brother still alive, insert anyone wealthy you can name) richer and the poor poorer.

And the vaccines. Well, they are just not safe nor do they work, because corporations control FDA. 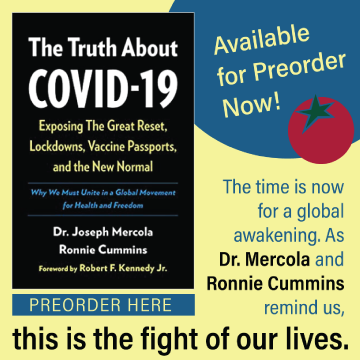 "this is the fight of our lives" is a reminder that 'things are better now than ever' is not where the Cadillacs are, hype about doomsday is where the money's at. Mercola is the same loon who sold cancer-preventing tanning beds until it cost him over $5 million in refunds and penalties.

It's the Wake Up Sheeple and Follow The Money narrative, except about COVID-19.

Don't agree that vaccines are a Bilderberg Group conspiracy? You must be on the take!

What is strange is how easily their new screeching can appeal to either side. If you copy and paste "public health fiat, carried out by politicians who rule by instilling fear and panic" into a right-wing site, it would fit right in, so it is worth wondering if Whole Foods will now start catering to the other side of the aisle as well. The founder of Whole Foods, John Mackey, is a die-hard conservative capitalist who successfully figured out that rich liberal elites would overpay for food if he marketed it correctly.  This would be a smart way to expand.

The organic industry is not natural, no one is born hating science, so they must groom and seduce new members. They are basically the vampires of agriculture. It may not be a crazy bad business decision that these two have written a book designed to appeal toward those who prefer freedom over social authoritarianism. It may be that it is just a smart money grab.
Science 2.0
More Articles All Articles
About