Organic Farming Is Not Compatible With Conservation
By Hank Campbell | October 21st 2020 09:24 AM | Print | E-mail

Hank Campbell
A recent paper finds that if just 15 percent of farmland reverted to nature, it would wipe out nearly a third of the carbon we've generated since the onset of the Industrial Revolution.

The good news; we can do that easily. The bad news; it involves science, and western elites in environmental activism, from Environmental Working Group in the U.S. To Swiss Public Eye in Europe, are never going to allow that without a fight.

America actually does quite well protecting the environment. We have more open land than Africa does. Because America leads the world in scientific approaches to agriculture, we also provide nutritious, affordable food using less water, less energy, and less land per unit than ever before. Modern agriculture has been so successful that Berkeley Professor Paul Ehrlich's apocalyptic "Population Bomb" prophecy and prognostications about rampant starvation have become a running joke.

We have even been so successful that wealthy elites in developed nations have embraced a kind of modern feudalism; hearkening back to a time when they got to lord it over peasants doing back-breaking work for the benefit of nobility. They buy organic food, with its imagery of weeding ancient crops by hand in the sun.

It's all fake, of course.

Organic food claims to be more natural, but only by redefining natural each year to be whatever they want. There are dozens and dozens and dozens of synthetic ingredients allowed under the USDA Organic stamp and a giant safety net besides; if there is no synthetic equivalent for a necessary chemical, that is allowed also. And there is no surprise spot testing to know if even those loose standards are being met. The more than 80 organic "certifying" bodies literally make no money unless they sell farmers organic stickers. They're not looking closely at their only customers.

That also bleeds into what science they accept or deny. GMOs are not natural, for example, but dunking seeks in chemicals and then bathing them in radiation to force mutations is organic - over 2,000 products on the market right now use this mutagenesis process. Likewise, copper sulfate was not used in the 1700s, before the first synthetic fertilizer existed, so why does it get a pass? The answer is the oldest of all; they know they have to use something and copper sulfate is cheap. The environmental impact is secondary.

Yet Whole Foods built a business claiming their organic food has no pesticides at all. It isn't clever marketing, it's a blatant lie.

It's a dangerous one, because the more organic the process, the more land and water and energy and pesticides it takes to feed the same person. An analysis of California, one state which monitors of all chemicals, and does not exempt organic from scrutiny, shows that organic food requires 800 percent more chemicals than conventional. 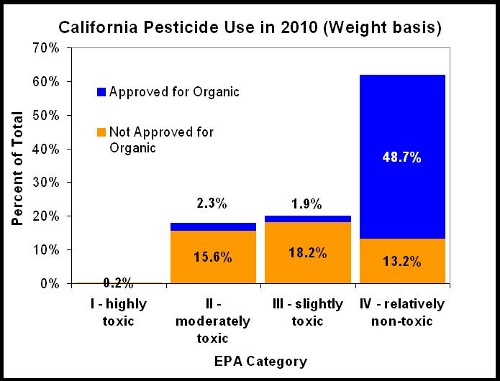 Yet one thing is true; more forests and open land are better for solving pollution that rationing electricity for everyone but the wealthy, who can afford giant mansions with "carbon offsets" and million-dollar solar installations subsidized by poor utility customers.

And it's entirely achievable. For just about the entire existence of Science 2.0, I have used a projection showing that if the rest of the world adopted America's progressive stance on agricultural science, farmland equivalent to the entire country of India, or all of Amazonia, could revert to nature. Not all land, farm land, currently being used. 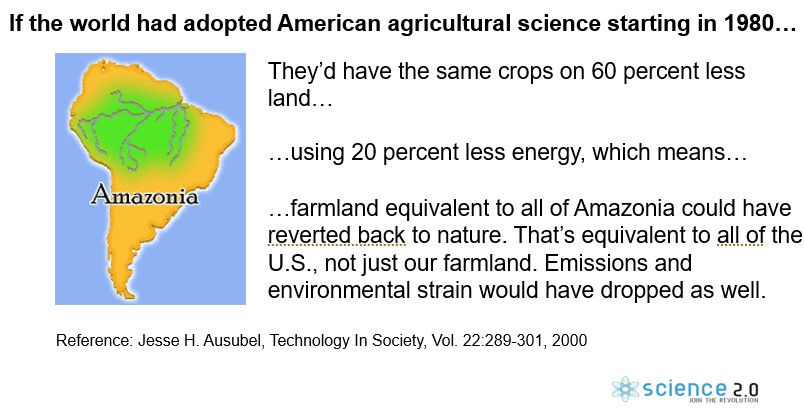 It's a future we should embrace, even as left-wing activists at political magazines like Mother Jones write books claiming modern farming is causing an "existential" crisis. Like science itself, such people have heard words like existential, but they have no idea what they really mean. As with organic food itself, it is just for effect.

Imagery is great but one thing the recent Nature paper makes clear is what impartial scientists have known all along; organic food is the enemy of biodiversity because it puts so much more strain on the land.
Science 2.0
More Articles All Articles
About