News Staff
Though some diet book authors want to suggest certain food types have magical power - trans fats, non-nutritive sweeteners, corn syrup, sugar, etc. - the rise in type 2 diabetes does not have anything to do with soda and everything  to do with energy balance.

People who eat more calories than they burn on a consistent basis gain weight, and that eventually begins to hinder insulin production, which can mean type 2 diabetes.

A recent study in Diabetologia finds that cardiorespiratory fitness (CRF), high-intensity physical activity (HPA) and low sedentary time (ST) are all associated with more normal weight and therefore a lower risk of type 2 diabetes. If you sit around a lot, you will have a great risk for worsened cardiac fitness. There is a genetic factor in cardiac fitness, of course, but the the risk is aggravated by differences in behavior. 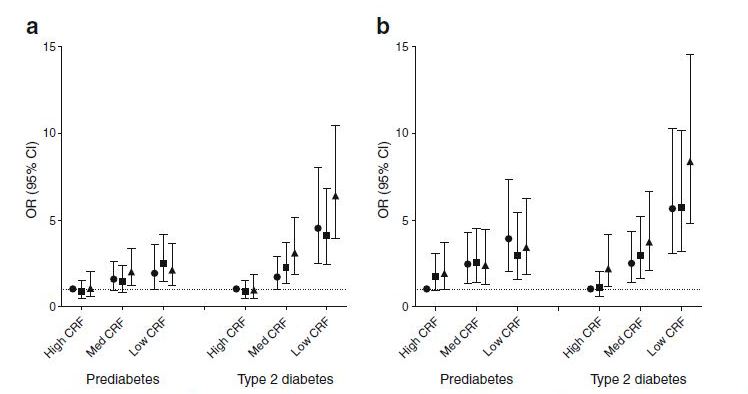 This paper used data from 1993 people aged 40-75 years from the Maastricht Study, all living in the southern part of the Netherlands. ST and HPA were measured using an accelerometer device. CRF was assessed using cycle-ergometer testing, with various calculations used to determine power output and oxygen consumption.

The authors then looked at high, medium and low levels and ST, HPA and CRF in combination with each other. Compared with those who had both high CRF and high HPA, the group with low CRF and low HPA had a 5.7 times higher risk of metabolic syndrome and a 6.4 times higher risk of type 2 diabetes.

Similarly, all subgroups with medium or low CRF had higher odds for the metabolic syndrome, prediabetes and type 2 diabetes, irrespective of ST. Even in those with high CRF, high ST was associated with a trebling of risk of metabolic syndrome and a doubling of risk of type 2 diabetes, suggesting that high CRF may not be enough to 'counteract' the poor health outcomes associated with high ST. This adds to the accumulating evidence that reducing a person's daily amount of ST could be an important part in improving their cardiometabolic health.

A change from low to medium CRF appeared to be more beneficial than from medium to high CRF, since the difference in risk of type 2 diabetes and metabolic syndrome was higher between low and medium CRF than between medium and high CRF.
News Articles
More Articles All Articles
About