Josh Bloom
It is pretty hard to trust or admire our government on a good day.

However, this is more of a theoretical concern than a practical one, since they haven't had a whole lot of them lately.

In July alone, workers for the Centers for Disease Control and Prevention  (CDC)  stumbled across an unsecured box of smallpox, which had been sitting around in a storage room for decades. Shortly thereafter, a different group managed to send out live anthrax (it was supposed to be dead) to research labs resulting in dozens of scientists being exposed, and subsequently treated with antibiotics.Ironically, only two months earlier, the CDC was participating in an ongoing debate about whether to destroy the "last" remaining sample of smallpox. Maybe they ought to put that on hold for awhile.

At the time, CDC director "Clueless Tom Frieden" (no relation to Shoeless Joe Jackson), who has led the agency since 2009, cleared this up: “We missed the broader pattern.” I don't know what this means, but I suspect it is government speak for "We really f######ed this up, but it's not my fault." 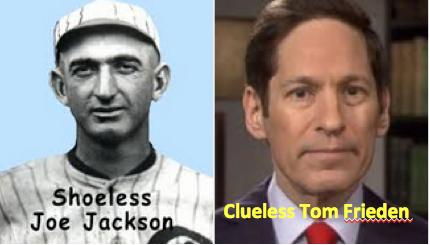 Lest you think that massive incompetence is limited to the CDC, The Secret Service isn't looking all that great either. This would seem to be beyond obvious since in the past few weeks, instead of being one of the world's most secure buildings, the White House has resembled Pamplona during the running of the bulls.

Now, on to Ebola. Although the actual impact of Ebola on the world thus far is currently minuscule, it has been the top news story much of the time over the past few weeks. (Google news lists about 15,000 articles during this period.)

Much of this can be attributed to media scares and frenzies—the currency of ratings— and it is clear that this is one of the main drivers here. But it is not the only one. The current Ebola outbreak is unprecedented, and this alone is guaranteed to generate fear. And, when you add in the supreme incompetence of our government (and mistrust of those of us who are at its mercy), being scared is maybe not so ridiculous this time—despite the virtually nonexistent threat to most of us right now.But, perhaps we ought to practice being more scared, since this week's release of the details of a new "plan" to protect us from the epidemic. This is really scary.

The CDC and the Obama administration announced a screening program at five major US airports, about which Clueless Tom says, "We believe these new measures will further protect the health of Americans..."

I don't know where to start.

The cornerstone of this plan is the identification of potential carriers of the virus who have arrived in the US from countries where the epidemic is occurring. Not a bad idea, right?

Yep—assuming that it was possible. This is, however, unlikely.

Why? Because the premise of the plan is so ridiculous that you might think that it was conceived by the Kardashian sisters.

First step: Take the temperature of arriving passengers from these flights. Let's take a look at what that will accomplish.

An asymptomatic, but infected person will have a fever for maybe one day (?) of the 21-day window that is believed to be the incubation period. And taking an Advil will mask it. Right away, this will miss almost everything that is relevant.

Then what? Let's say a fever is detected. What are the chances that it is a result of Ebola rather than any of the following—all of which cause fevers:

Taking temperatures at airports should prevent approximately zero ebola-infected people from entering the country. But it will sure clog up the system with people with other common infections.


This is borne out by data from the CDC itself:  Over the past two months, 36,000 passengers from West Africa were checked for fevers before being allowed to board planes. Seventy-seven of them had fevers and were not allowed to get on the plane. Later it was determined that none were infected with Ebola. I'm quite sure that with additional effort, we will be able to deny boarding to many more uninfected people who happen to have fevers.

Perhaps worse, is the second part of the plan: interviewing selected passengers. Now there’s a damn fine idea. Someone who arrives at JFK with a fever will be asked various questions to determine their possible exposure to Ebola in Africa. Talk about a disincentive to be honest. "Let’s see, if I answer no I’m in a cab in thirty minutes. If I answer yes, maybe I’m in isolation for a few weeks along with a bunch of sick Africans. What to do?”

So, this is almost certainly a massive program that is being set up despite an almost guaranteed chance of failure—just like many other misguided governmental efforts, health-related or not.

The good news is that if there is another plan being hatched—perhaps parachuting a bunch of vomiting Liberians into Times Square—I am unaware of it. The bad news remains to be seen. It may very well be determined by sheer luck.