Tommaso Dorigo
Higgs boson hunters often catch themselves dreaming of the boson having a mass high enough to give rise to the spectacular decay into two Z bosons, and then four charged leptons in the final state. At a hadron collider -let's talk of the LHC to be specific- such a signature is the only one providing events which, once properly selected, are more likely signal than background.

The situation of observing an event display being able to tell for sure what it represents, among the infinite possibilities and the intrinsic indetermination of quantum processes, is reassuring and gives a physicist a feeling of power. God did not play dice this time: those two are 100% Z bosons, and their combined mass is exactly the one of the Higgs.

Now look at what the CDF search for four-lepton decays of ZZ pairs turned out, in the graph above. CDF is one of the two experiments working with the proton-antiproton collisions that the Tevatron collider has provided for nearly 25 years. The accelerator has stopped working last month, but the data will continue to be analyzed for much longer. This measurement, in particular, will be updated with the total statistics collected by CDF; so far it shows data equivalent to an integrated luminosity of 6 inverse femtobarns -little more than half the total collected.

I have discussed this measurement already in the past, but for some reason I decided to post this one graph again today. The figure shows the invariant mass of the four leptons, which must come from the decay of Z pairs, backgrounds from other processes being really negligible. If a Higgs boson existed, it could show up in such a distribution as a clustering of events all at the same reconstructed mass...

Surprisingly, of the eight candidate events four do cluster at nearly the same mass, 327 GeV; the other four more closely follow the expected distribution of Standard-Model production of ZZ pairs. What is then that funny 327 GeV clustering: a Higgs decay ? 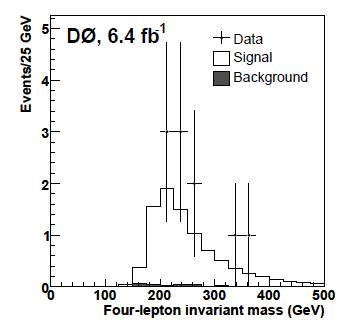 Most likely not: the cross section of such a Higgs boson would have to be much higher than predicted. What's more, no similar thing has appeared in the by now similarly-sized data samples of the LHC experiments. Check for instance the CMS ZZ mass distribution above, also discussed in more detail in the link above. In it, the data are compared to backgrounds (the total being shown in purple) and different Higgs mass hypotheses (in different shades of red). Or check the DZERO result on ZZ searches shown on the right below, performed with 6.4 inverse femtobarns of data and reported in this article. Here, they call "Signal" the ZZ process from regular SM processes not including the Higgs.

Or see the ATLAS result below, obtained with a luminosity of 2.1 inverse femtobarns (and reported here); there, again three different (and mutually exclusive) Higgs mass hypotheses are placed on top of expected SM backgrounds for comparison.

If you are a believer, you might argue that all three experiments do see events in the 325 GeV ballpark... Exactly one event each. But if the CDF signal were true, these experiments (especially CMS and ATLAS) should have seen a larger number of such events, all piling up within 10 GeV or so of the 325 GeV region. At least a score each, in the case of ATLAS and CMS. 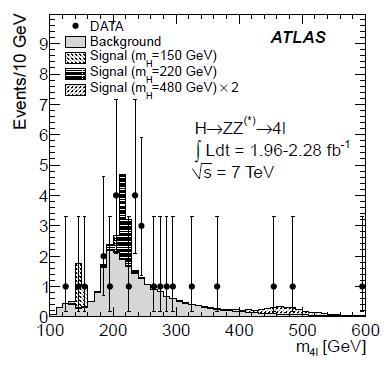 Alas, a fluctuation. A very suggestive one, to be sure; one which might be called an observation of a new physics process, if the threshold for such claims were not placed at very high level of significance. In fact, the probability of the observed clustering (and of additional remarkable properties of those four high-mass events) is estimated to be of the order of 0.0001: "only" three-point-something standard deviations, nothing to worry too much about.

The lesson to take home is one which affectionate readers of this blog already know by heart: in High-Energy Physics, 2- and 3-sigma effects are not uncommon, and mean usually very little. We test hundreds of distributions, and anomalies can show up any place in these distributions. 3-sigma effects are bound to occur!
A Quantum Diaries Survivor
More Articles All Articles
About