Hank Campbell
Most of the world that has access to the Internet knows two things about the Rosetta mission - it landed on a comet and a European engineer wore an ugly shirt that offended a lot of American women on Twitter.

The least interesting news is that the ESA now knows that if women can't wear bathing suits to represent them on television, then male project scientists cannot wear bowling shirts and shorts. The important news, however, is that mankind has shown we can go on a 10 year, 4 billion mile journey through the solar system and land on a rock the size of Cork City, Ireland.

Comet 67P/Churyumov–Gerasimenko after 10 years and it arrived in just the right spot. That is a heck of an achievement.

But there is bad news also. As was noted yesterday, it was unclear if the harpoons on Philae had fired and it seems they have not. That means it is only holding on with ice screws in each foot.

Because the lander did not anchor properly it bounced twice and is not in the flat Agilkia landing site on the head of the double-lobed rock but is instead partially shaded. That means engineers are unsure how well it can charge its secondary battery and they will have to proactively decide which instruments get priority access with the 60 hours of power available from the primary battery.

As Christian Schroeder of the University of Stirling notes, this also brings new problems: "The APXS and MUPUS (the MUlti-PUrpose Sensors for Surface and Sub-Surface Science) instruments have to be moved close to the surface to make their measurements. This consumes energy – and risks moving the still not safely anchored Philae into an even more unfavourable position."

Not knowing all of the answers is not a bad thing, it's actually exciting. Can they move it? Will they get enough sun to charge the secondary battery? This thing just got a whole lot more interesting than measuring X-ray spectra of comet dust.

Anything to not have to talk about this guy's shirt any more: 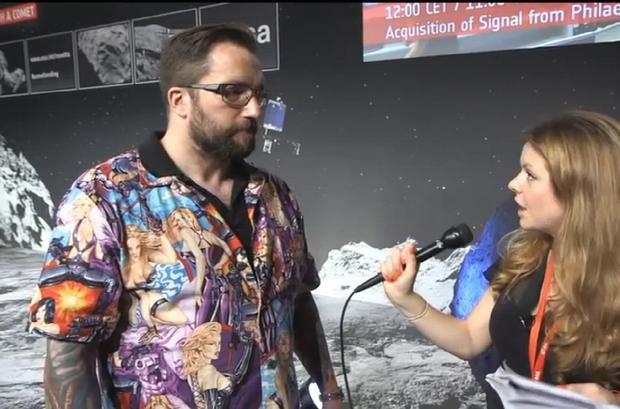 Matt Taylor's shirt. There is nothing remotely sexist about this guy, he thought he was being an individual and those tattoos do not scream 'I confirm to your world view' so he clearly wanted to stick it to The Man knowing he might be on TV wearing this, but he discovered that science media enforces conformity and political correctness - or else. And that by wearing that shirt, to some women he has become the thing he believes he is defying. Credit: ESA
Science 2.0
More Articles All Articles
About