Tommaso Dorigo
In the previous post I discussed, among other things, a purely empirical observation on the mass spectrum of elementary particles, which I summarized in a graph where on the vertical scale I put the year of discovery, and where I only cared to plot particles with a mass above a keV - in fact, we know that neutrinos have non-zero masses, but we have not measured them and they are of the order of an eV or below. Okay, for simplicity I will re-publish the graph below. 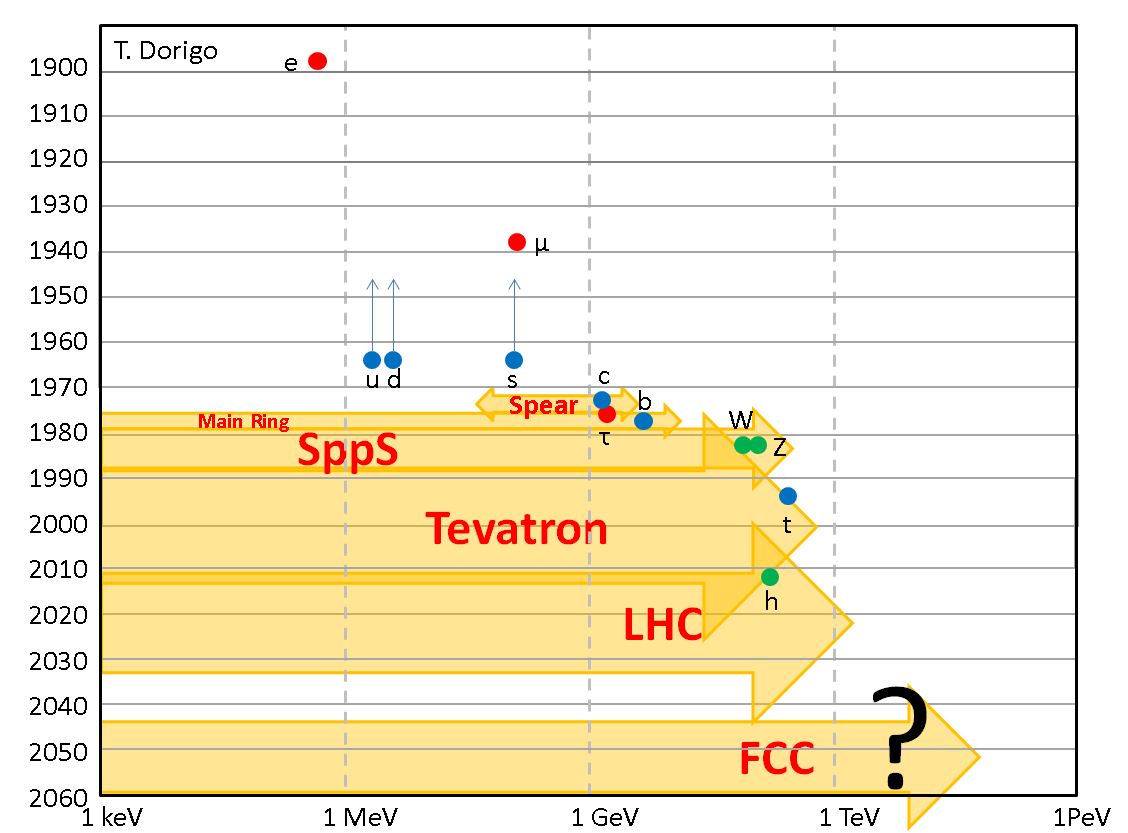 The graph shows that every time we furthered our exploration at the high-energy end of elementary particle spectra - with the Main Ring, the SppS, the Tevatron, the LHC if we only speak of hadron colliders - we discovered new elementary particles. But now, the absence of further heaps of new elementary particles in LHC data besides the Higgs boson has fueled the debate. We "have no proof" that a future circular collider (FCC, which would collide protons at 100 TeV of energy) would find new particles, apparently - all what matters to our critics seems to be a theoretical prejudice for or against the meaning of observing a "unnaturally low" mass of the Higgs boson.

So there are concerns that there is a "desert", no new particles to discover up to the Planck mass scale (10^18 GeV, give or take some). Of course we will never reach such extremely high energy with particle colliders, so why not stop now and save the money? Doh.

After publishing the previous article with the above graph, I have seen discussions of my purely empirical observation hijacked by those who want to draw attention to the arguably very important theoretical debate on naturalness (no, sorry, I will not discuss it here now). I do not care about that - I am used to consider quite separately theoretical and empirical facts: heck, I do not even dare combine experimental and theoretical uncertainties in my measurements! So here I wish to stress the matter from another viewpoint: while yesterday I provided a graph, today I make it even easier to you to make up your own "experiment-driven prior" on the matter.

No, really, not the one you thought of. Rather, numerology. Still some kind of a taboo in serious science. But let's play for a second.

Say I give you a succession of integer numbers. 6, 0, 2, 20, 24, a, b, c, d, e. I also tell you - the only "theoretical prejudice" in the matter, but one on which the agreement is overwhelming - that a,b,c,d,e are not all zero. We have no idea what they are, other than that; they could all be equal to 63, or whatever other non-negative integer you fancy. So with the above data, please make up your mind on whether a should be zero.

The matter is of relevance, because the above succession is made up with the number of massive elementary particles we discovered so far, binned in factors of 1000 starting from a milli-eV (so that in the first bin we can, with some confidence, put the three neutrinos and their antiparticles). In the given order you see:

With the data collected between 2010 and 2018 the LHC has had a bit of a glimpse above the TeV, but is not sensitive the same way to e.g. heavy leptons, heavy vector bosons, and heavy quarks or gluons, so I think we can concur that so far the TeV to PeV region is still unexplored (e.g. there are many "benchmark" new physics models for which the excluded particle masses are below a TeV). Hence, a can have any value. Do you think it is zero, knowing that the sum of a+b+c+d+e is most certainly non-zero?

Let me give another numerological argument against the "desert". The FCC critics leverage the absence of new particles above the top quark (173 GeV) up to the highest masses probed by the LHC until now, which are arguably in the 1 to 3 TeV range. Let's make it 2 TeV for simplicity. So there is a factor of 12 in range above the top, where we found nothing new (as noted above, strictly speaking we are not yet sure there are no new particles below the TeV, especially if they have weak interactions like a neutralino; but let's not fret over details).

Let us then go back to the spectrum of particles we did measure, and see what happens there. As you can check in the graph above, there are indeed some mass regions packed with particles of similar mass (something that is also in some way expected due to the "multiplet" nature of fermions and bosons as irreducible representation of symmetry groups), but there are also significant gaps:

- Between the muon and the charm the factor is 12


So is our observation of no new particles up to a factor of 12 above the top quark mass a real turnoff in the purely empirical examination of elementary particle mass spectra? In other words, are we justified if we say that, given we have found nothing on our first 12 steps, we should not take some further 100, just to be sure?

The above question, as dumbed down as you wish to label it, is relevant, as the advocates of the "desert" argue that we have no proof that the next void doesn't in fact have a span of 1000000000000000. They also like to point out that, there being no guarantee that the gap isn't larger than 100 above the top quark (roughly the reach of a future circular collider), we should close shop and sell our magnets as scrap metal.

I think the truth of the matter is: we do not know, nor we ever will if we do not continue investigating at high energy; and there is no change in this situation with respect to when we decided to build the LHC. I do argue the LHC was built with the justification of finding the Higgs; but note that critics of the FCC argue otherwise.

And, since Lubos Motl provided an appreciated correction to my former post, as a hat tip I will conclude in his style: