There were no differences in the development of COVID19 symptoms or positive tests at days 5, 10, or 14 following exposure. This period of time was chosen as it represents the typical phase during which individuals become symptomatic after COVID19 exposure. Two weeks after exposure 11.8% of adults treated with hydroxychloroquine had symptoms or positive COVID19 tests, which was not significantly different from the 14.3% value seen in the placebo group. 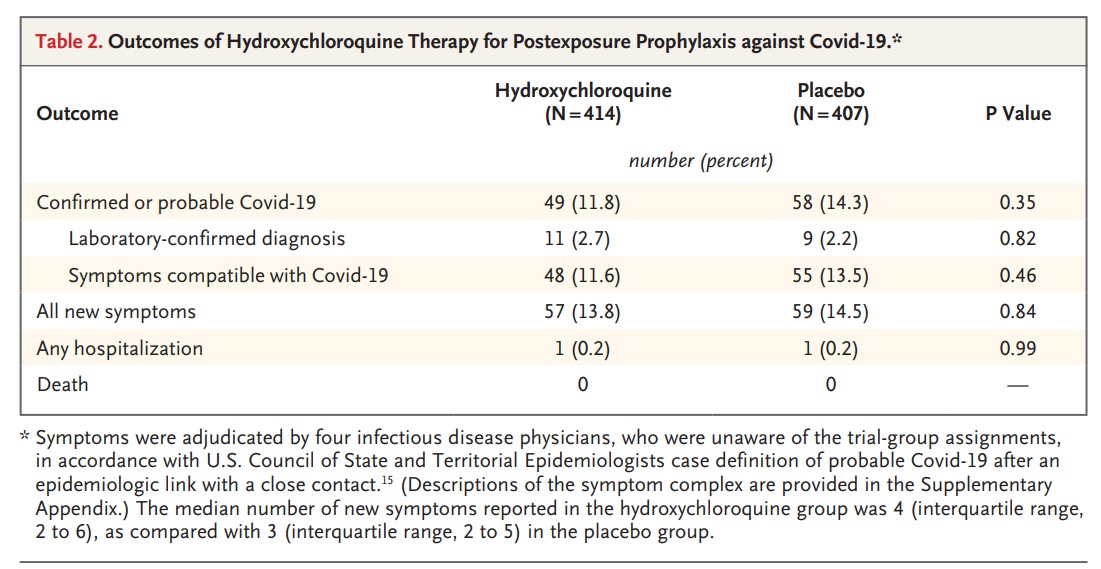 Similar numbers of participants in each group failed to complete the trial: 46 subjects in the hydroxychloroquine group and 42 placebo-treated people. One hospitalization was reported for each group and there were no deaths in the study.

Hydroxychloroquine is associated with an increased risk of cardiac arrhythmias. This has been raised as a concern in the treatment of COVID19, however there were no reports of serious adverse cardiac events in either group.

Individuals treated with hydroxychloroquine had a significantly greater incidence of reported side-effects. Common reactions included diarrhea, nausea, and neurological issues such as headaches and dizziness. Overall 40.1% of the members of the hydroxychloroquine-treated group had side-effects while only 16.8% of the placebo group reported issues.

Overall the study found no significant benefits of hydroxychloroquine treatment to prevent COVID19 after a documented exposure. There was an increased risk of side-effects with treatment, but most were not serious and there were no reports of cardiac problems.

While this study represents the first significant trial to test the post-exposure prophylactic potential of hydroxychloroquine for COVID19, there are some important elements to consider to put the findings in perspective.

The development of COVID19 following exposure was measured by laboratory testing or reported symptoms associated with the condition. Given the challenges in the availability of COVID19 testing in Canada and the U.S. the ability to subject all participants to laboratory testing was not realistic. Four ID physicians who were blinded to the group assignments of subjects independently reviewed the reported symptoms to determine if subjects had likely developed COVID19. It is possible that asymptomatic or mild cases may have gone unreported or that similar symptoms resulted in false positives. Interestingly two-thirds of subjects in both groups were healthcare professionals. Their professional training and experience with COVID19 should enhance the reliability of symptomatic reporting and decrease the risk of misdiagnosis. However, the lack of laboratory confirmed testing and monitoring of viral load are significant limitations of the study.

Is Disease Severity a Factor?

The severity of COVID19 is strongly linked to the general health status of patients at the time of exposure. Older patients with comorbidities including cardiovascular disease, chronic respiratory conditions, or compromised immune systems are more likely to have more severe illness and a higher rate of mortality. The subjects in this study tended to be relatively young (median age around 40 years in both groups) and had reported rates of comorbidities including hypertension, asthma, and diabetes that were at or below national averages for this age group. The health status and age of this cohort probably contributed to the relatively mild outcomes in terms of hospitalization and lack of deaths.

It could be argued that the lack of effectiveness of hydroxychloroquine was a product of the healthy subject population of the study, and that high-risk patients would see more benefit from this preventative treatment. This hypothesis can only be tested by treating a high-risk population with hydroxychloroquine. While this could be considered in the context of a tightly regulated clinical trial, the authors urge caution in pursuing this investigation, given the known risks of hydroxychloroquine in a group that is more susceptible to severe COVID19 illness.

To date the evidence for any significant benefit of hydroxychloroquine treatment is lacking, but the risks of treatments are known and have been demonstrated in COVID19 patients. A retrospective study by Chorin and colleagues found 23% of COVID19 patients treated with hydroxychloroquine and the antibiotic azithromycin had high-risk markers for cardiac arrhythmias, and that this risk remained for several days after ending treatment.

The negative side-effects reported by Chorin’s study could be attributed to azithromycin which itself has cardiac risks and heightens the risk of cardiac arrhythmias due to hydroxychloroquine. However, Mercuro et al note an elevated risk of cardiac arrhythmias in COVID19 patients due to hydroxychloroquine that is independent of azithromycin and may be due to the stress of cardiovascular comorbidities often found in COVID19 patients or the stress of severe illness on the heart itself.

In addition to adding azithromycin to hydroxychloroquine treatment, some have argued for the inclusion of zinc as a supplement. Although not included in the main body of the study, researchers did collect data on the self-reported use of zinc supplements by members of both the hydroxychloroquine and placebo groups. These data showed no significant impact of zinc on the development of COVID19 symptoms or positive tests either alone or in combination with hydroxychloroquine. The lack of standardized treatment with zinc coupled with the reliance on self-reporting limits the reliability of these particular findings although it should be noted that these data were incidental and not a stated objective of the study’s authors.

One Day at a Time

Hydroxychloroquine continues to be investigated as both a preventative treatment and therapy for COVID19 patients in several clinical trials. There is debate about the details of treatment including dose and timing, as well as which patients are most likely to benefit. Despite the lack of clarity about how hydroxychloroquine should be applied, one point is becoming increasingly clear: the evidence to support the use of hydroxychloroquine is simply not there and promoting its use outside of rigorously monitored clinical trials is irresponsible and potentially dangerous.

Research may one day find the right conditions under which hydroxychloroquine is an effective treatment for COVID19, but today is not that day.