"Our ignorance is not so vast as our failure to use what we know."

I am confident that, if he were still with us, M. King Hubbard would be strongly in favor of the pursuit of alternatives to fossil fuels.  He demonstrated that our use of fossil fuels was not only unsustainable, but could lead to a reversion to an agrarian economy if we failed to address the problem of our dependence on fossil fuels.

Given his insightful writings on fossil fuels, population and energy I am confident that he would have accepted global warming as a fact and our emissions of CO2 as the most probable cause.

One of the City's most respected institutions has warned of "catastrophic consequences" for businesses that fail to prepare for a world of increasing oil scarcity and a lower carbon economy.

The Lloyd's insurance market and the highly regarded Royal Institute of International Affairs, known as Chatham House, says Britain needs to be ready for "peak oil" and disrupted energy supplies at a time of soaring fuel demand in China and India, constraints on production caused by the BP oil spill and political moves to cut CO2 to halt global warming.

Richard Ward, chief executive of Lloyd's, said the failure of the Copenhagen climate change talks last December has helped lull many business leaders into a false sense of security about the challenges ahead. "We are in a period akin to a phony war. We keep hearing of difficulties to come, but with oil, gas and coal still broadly accessible – and largely capable of being distributed where they are needed – the bad times have not yet hit ... all businesses ... will be affected by energy supplies which are less reliable and more expensive."

The Frog in the well - an interlude

Global warming is a global climate trend.  Taking the planet as a whole we observe that the average temperature is taking a drunkard's walk.  It goes first one way and then the other.  But the average drift is upward.   It's a bit like the old 'frog-in-a-well' trick question.

A frog is at the bottom of a 30 foot well.  Each day he climbs up 3 feet and each day an evil agendist climate scientist  moves him 2 feet back down.  How many days does it take the frog to climb out of the well?  Forget math: there's a heuristic.  I call it a heuristic because if I called it a trick I might get accused of being an evil agendist climate scientist.   The heuristic looks at how many days of 3 minus 2 feet of climbing are required to put the frog 3 feet below the top of the well.  30 - 3 = 27, and that's the answer.  On day 27 the frog gets out of the well, out of the lab and as far away from Doctor Evil and his henchmen as he can hop.

If you plot the vertical location of the frog against a time axis you get a graph with a clear trend.  Trends are driven by causality.   In this case, the cause of the trend is the frog's desire to get away from a sadistic experimenter and go get kissed by a princess.

In the real world, frogs are too intelligent to take part in mad math experiments.  You can set that frog back maybe a few times, but once he learns that taking a rest is a bad strategy he'll be out of that well before you can say: "Where'd he go?".  If you plot the trend line, it will look a bit like a hockey stick.

If you make a graph of human population over time you get a fairly slow rise and then a sharp upswing.  If you are a scientist, start the graph at zero: if you are a creationist, start the graph at two.  It doesn't matter.  Nobody sets up inquiries into the bona fides of people who draw up population graphs, and nobody hacks their emails.  The validity of the graphs is generally accepted.  Newspapers reporting on population never feel the need for 'balance' - the need to quote people who insist that population growth isn't really happening. 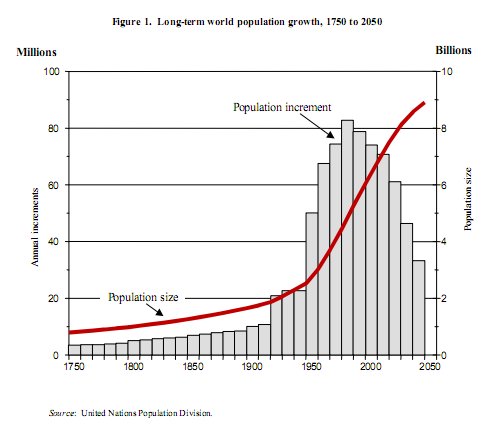 For as long as we continue to use fossil fuels as our raw materials or energy source in the manufacture of anything at all, any graph of human consumption of energy over time will be steeper than any graph of general consumption.  That is not all: population and energy use are interdependent variables.  Population growth stimulates demand for energy, but increasing use of energy stimulates population growth.  That observation was made by M. King Hubbert in Energy_from_Fossil_Fuels, 1949.

One of the most disturbing ecological influences of recent millennia is the human species’ proclivity for the capture of energy, resulting in a progressive increase of the human population.

Regardless of whether, or by how much, CO2 causes global warming, we should still be investing in alternatives to fossil fuels.  Why?  Because, as M. King Hubbert pointed out, you can change the rate at which you consume a finite resource, but you can't change the area under the curve.  By rushing to extract ever more oil we just bring forward the time when there will be no oil left.

Hubbert wrote extensively on this topic and accurately predicted that US oil production would peak between 1965 and 1970.  His estimate of world peak is close to current estimates.  Below are his diagrams from Nuclear Energy and the Fossil Fuels, 1956. 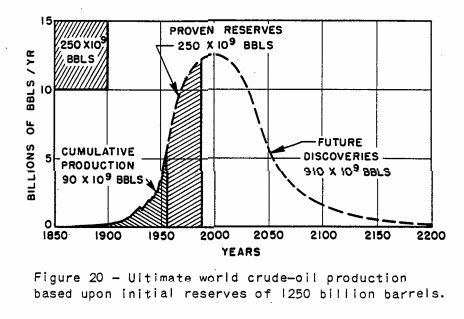 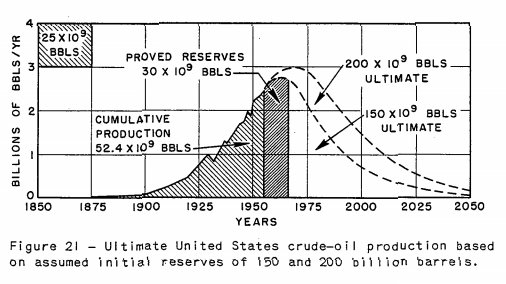 The point about peaking of a finite resource is that we tend to go for what is easily accessible first.  As time progresses we spend more and more to get less and less until we run out or we decide that further extraction is uneconomic.   In the case of oil - a form of energy - we can only extract oil up to the point that we get more energy out of our oil extraction system than we put in.  Once we have reached that point it matters not a jot how much oil is left in the ground: to extract it economically we would have to break the 2nd law of thermodynamics.  Physics trumps economics every time.

If oil had the price of pharmaceuticals and could be sold in unlimited quantity, we probably would get it all out except the smell. However there is a different and more fundamental cost that is independent of the monetary price. That is the energy cost of exploration and production. So long as oil is used as a source of energy, when the energy cost of recovering a barrel of oil becomes greater than the energy content of the oil, production will cease no matter what the monetary price may be. During the last decade we have very large increases in the monetary price of oil. This has stimulated an accelerated program of exploratory drilling and a slightly increased rate of discovery, but the discoveries per foot of exploratory drilling have continuously declined from an initial rate of about 200 barrels per foot to a present rate of only 8 barrels per foot.

The case for alternative energy:

It is clear, therefore, that our present position on the nearly vertical front slopes of these curves is a precarious one, and that the events which we are witnessing and experiencing, far from being “normal,” are among the most abnormal and anomalous in the history of the world. Yet we cannot turn back; neither can we consolidate our gains and remain where we are. In fact, we have no choice but to proceed into a future which we may be assured will differ markedly from anything we have experienced thus far.

Among the inevitable characteristics of this future will be the progressive exhaustion of the mineral fuels, and the accompanying transfer of the material elements of the earth from naturally occurring deposits of high concentration to states of low concentration dissemination. Yet despite this, it will still be physically possible to stabilize the human population at some reasonable figure, and by means of the energy from sunshine alone to utilize low-grade concentrations of materials and still maintain a high-energy industrial civilization indefinitely.

Whether this possibility shall be realized, or whether we shall continue as at present until a succession of crises develop—overpopulation, exhaustion of resources and eventual decline—depends largely upon whether a serious cultural lag can be overcome. In view of the rapidity with which the transition to our present state has occurred it is not surprising that such a cultural lag should exist, and that we should continue to react to the fundamentally simple physical, chemical, and biological needs of our social complex with the sacred-cow behavior patterns of our agrarian and pre-scientific past. However, it is upon our ability to eliminate this lag and to evolve a culture more nearly in conformity with the limitations imposed upon us by the basic properties of matter and energy that the future of our civilization largely depends.

Should we be investing more money in oil, or in alternatives?