Tweet
On November 19th, 1969, Apollo 12 landed on the moon, but most people from the era don't remember much about it. Apollo 11, sure, a giant leap for all mankind, and Apollo 13 was the most successful failure NASA ever had, it got a movie made about it, but that leaves Apollo 12 a memory.

And that's too bad. Because they were the funniest Apollo crew, according to this NPR spot.

You may be thinking, 'funny astronauts?' and I get that. I have been a part of two communities, military officers and science, that the general public does not think are funny at all. Both groups hide it outside the circle because that imagery doesn't sell, but both groups are often incredibly hilarious because they're intelligent. And while the original Mercury program were all test pilots, Gus Grissom had been an engineer's engineer, the most highly regarded inside the program because he was so smart, and he became the template for future missions. 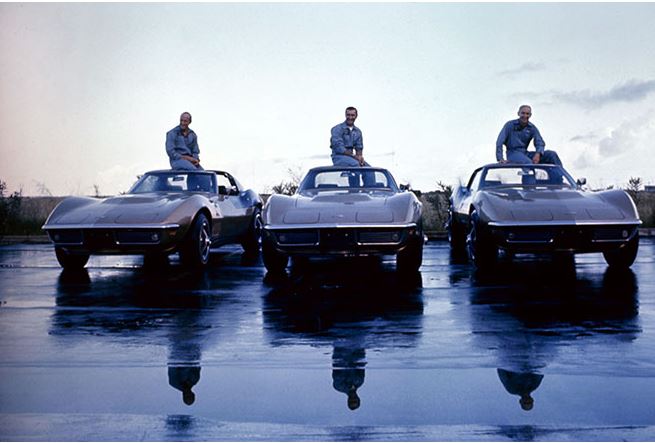 Like all Apollo astronauts, XII got Corvettes for a dollar a year. Here is a General Motors photo with their 1969 Corvette Stingray coupes. Alan Bean's is now in the National Historic Vehicle Register Photo: Ralph Morse via General Motors

Scientists need senses of humor because failure is built into the process, while many military officers face the prospect of death. Astronauts then were often both and faced both. For commander Pete Conrad, lunar module pilot Alan Bean and command module pilot Dick Gordon the hilarity started early, because their craft was struck by lightning at launch November 14th - twice.

That didn't get them down. They were going to the moon, after all, and that gave them a lot to sing about.