This is a follow-on to my previous article about an opinion piece in the Times Literary Supplement which news media at first accepted uncritically as fact.

It may well be said that there are no Voynich manuscript experts, because nobody has yet translated the VM into a modern language.  Or, rather, no such translation claim has so far been accepted by, shall we say, people versed in the scientific method.  That said, there are some who are notably well informed about the VM, and were so before I ever started my own researches.

Nick Pelling, who is beyond any doubt well versed in the scientific method is struggling to explain to wiki editors why the Gibbs entry should be deleted.  He has more patience than me: I long since abandoned the edit-undo, edit-undo waste of my time. 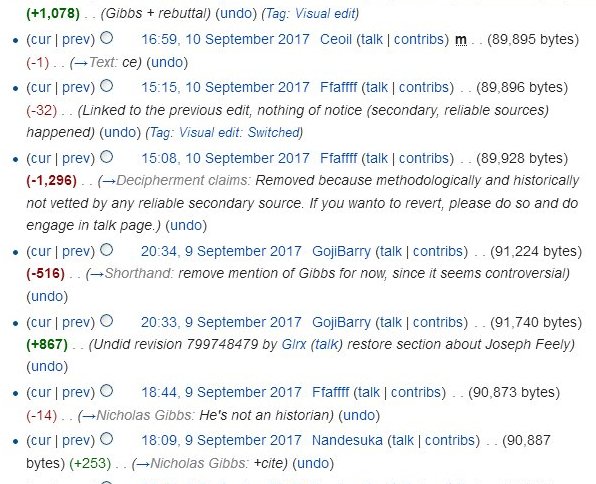 I don't edit Wikipedia because I decline to engage in editing wars.  But if I did edit, I would have this to say to the editors who insist on giving Nicholas Gibbs the cachet of a Wikipedia entry.

Self publication.  Although Gibbs' article was published by the Times Literary Supplement it was posted under 'commentary'  by Gibbs himself, not by a journalist.  As a commentary aka opinion piece it was not endorsed by TLS.  There was obviously no review by people conversant with the subject matter.  Had TLS sought independent review the article would certainly not have been published by them.  Independent reviewers have slated the article.  Gibbs has evidently relied on the lack of fact checking by TLS to boost his web profile.

A self-published source can have all of these qualities except for the second one.

Wikipedia on Self publication

It doesn't matter how reputable a publishing house is: as soon as it publishes what a majority of people with relevant skills regard as garbage it loses its reputation.

Anyone can self-publish information regardless of whether s/he is truly knowledgeable about the topic in question. For that reason, self-published works are largely not acceptable to use as sources, though there are exceptions.

Self-published material is characterized by the lack of reviewers who are independent of the author (those without a conflict of interest) validating the reliability of contents.

Wikipedia on Self publication

A form of review is available through regular media coverage.

Every article on Wikipedia must be based upon verifiable statements from multiple third-party reliable sources with a reputation for fact-checking and accuracy. A third-party source is one that is entirely independent of the subject being covered, e.g., a newspaper

Gibbs' article was a single source and obviously not reviewed for plausibility and coherence by TLS.  However, it has been reviewed by the reputable media Ars Technica and The Atlantic.  Oh, yes: I have a vague suspicion that The New Yorker has a halfway decent reputation as well.

I logged on to Facebook. There, as I’d hoped, I found some medievalist friends chortling over Gibbs’s theory. I followed a link to tweets written by the CUNY professor Karl Steel, who examined my own doctorate in medieval literature. In response to a frothy announcement that the code had been cracked, he had tweeted, “Nah.” A screenshot of this tweet by the Colby professor Megan Cook had gone moderately viral.

As a rule of thumb, the more people engaged in checking facts, analyzing legal issues, and scrutinizing the writing, the more reliable the publication.

“Frankly I’m a little surprised the TLS published it,” says Lisa Fagin Davis, executive director of the Medieval Academy of America. When she was a doctoral student at Yale—whose Beinecke Library holds the Voynich manuscript—Davis read dozens of theories as part of her job. “If they had simply sent to it to the Beinecke Library, they would have rebutted it in a heartbeat,” she says. She told me that, by coincidence, she  had dinner recently with Beinecke’s curator, who had not heard from TLS about the article.

If Wikipedia is to mention Gibbs as having, without endorsement, claimed to have translated the Voynich Manuscript then it must list every other claim, good, bad or off this planet which has been reported in news media. 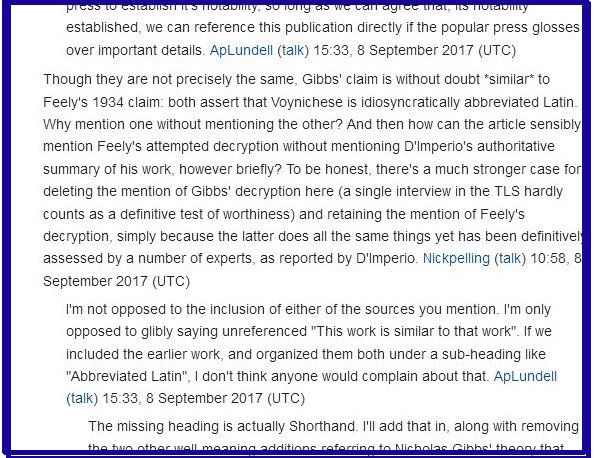 As far as I know, my own efforts have not been reported by traditional media, so I am not looking to be included in a list of perhaps thousands of claimants.  Rather, I am looking toWikipedians to stick to the list of claims as it was, without the reference to the self-reporting of Gibbs.  I have no quarrel with the other entries in the list. 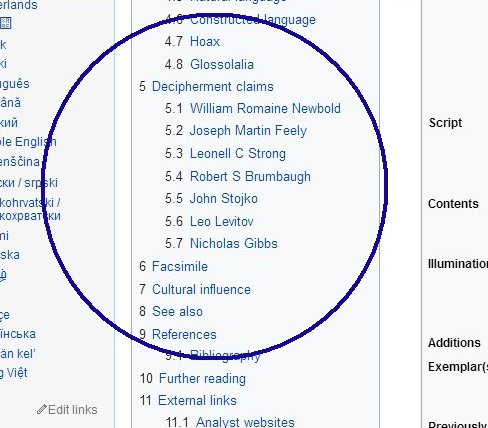