Tommaso Dorigo
Another confirmation of correct evaluation of controversial HEP measurements awaited me just after the Higgs evidence was presented at CERN. I am sort of embarassed by this compulsory self-promotion, but this is my blog so I will excuse myself ;-)

So the story is the following... Some of you might still remember the controversy over the Omega b discovery, at the Tevatron a couple of years ago.

The Omega_b, in case you asked, is a very interesting particle, made up by a bottom quark and two strange quarks. Its decay gives rise to a spectacular chain, but the rarity of production and of exclusive decay modes which allow a full reconstruction of the Omega_b made the observation difficult to achieve until very large data samples were collected - by the Tevatron experiments first, and now by LHCb.

The particle was observed by both DZERO and CDF in 2009, but there were some issues with the DZERO measurement of the mass, as well as with the quoted significance.

Let's leave aside the issue of significance - the particle is well established by now anyway. Instead, let us focus on the mass: CDF quoted the mass as M=6054.4+-6.8+-0.9 MeV, while DZERO quoted the measurement as M=6165+-10+-13 MeV. The two results disagreed quite strongly (by over six standard deviations, taking the quoted experimental uncertainties at face value), and one is led to believe that at least one of the two experiments badly underestimated their systematic uncertainties. Some of us had a hunch for which experiment could be responsible... I wrote a series of posts on the matter in 2009 (see the three main entries here, here, and here), and even produced a quick-and-dirty study where I corrected the DZERO evaluation of significance and discussed which of the two mass measurement was probably incorrect.

Now LHCb puts the matter to rest. Their measurement (M=6050.3+-4.5+-2.2 MeV) is more accurate than the Tevatron ones, and perfectly confirms the CDF one, clarifying that DZERO really got this wrong -their mass is over six sigma out in the woods.

Below you can see the reconstructed mass of Omega_b candidates by LHCb, found in the decay to J/psi mesons (particles made up by a charm-anticharm pair) and Omega minus baryons (bound states of three strange quarks).

For more information on the result, please check their paper - I unfortunately  cannot comment on the result in more detail at the moment. 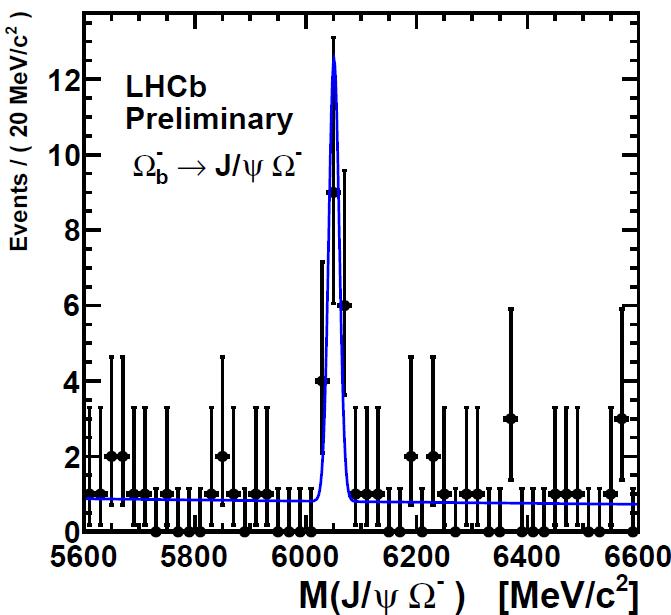