This is running as a scary story in the more sensationalist science outlets. Dark matter barely interacts with matter and if they are right we are right in the middle of it already. It can’t do any harm. It’s been doing this for all of human history and more.

Each second about a hundred billion neutrinos pass through every square centimeter of your body. You don't notice a thing. Nor do they notice you. They have to go through a light year of thickness of lead to stop half of them. And most dark matter is likely to be harder to spot than neutrinos as they have tried for many years and not yet spotted anything else. NASA's Cosmos

This is an artist’s impression from the Synopsis- but it doesn’t match the figure in the paper, so I don’t think it’s meant to be this actual stream. But it gives an idea of how it works. 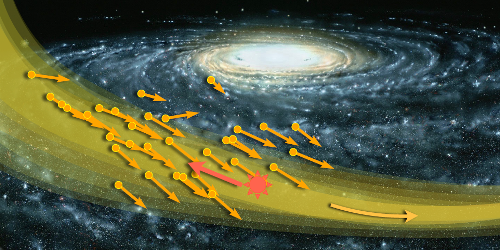 The yellow dots are stars in a stream, and the pink dot is us. The yellow glow I think is meant to be the dark matter which if they are right is flowing through our solar system, and straight through Earth right now.

All this is happening on cosmological timescales, the stars that are flowing past us - at vast distances of many light years - are moving past at the pace at which stars move across the sky. We don’t even see stars move by eye from one century to the next - so it must have been blowing through Earth for all of human history at least and for much longer than that.

Many of them seem to be basing it on an article in Cosmos magazine which misquotes the researchers suggesting it as something will happen in the future. If you read the paper it is clear. We are in it right now.

Here, we draw attention to a remarkable new stream, S1, recently discovered in data from the Sloan Digital Sky Survey (SDSS) and the Gaia satellite.

A coherent stream of DM associated with S1 hits the Solar system slap in the face.

Cosmos magazine quoted them as:

As the S1 stream “hits the solar system slap in the face”, the authors write, its counter-rotating structure will dramatically increase the amount of dark matter appearing to come from the same patch of sky as the standard dark matter wind” Researchers brace for dark matter ‘hurricane’

I.e. they changed the present tense of the paper into future tense suggesting they were expecting this in the future. Actually we are already right in the middle of it.

It just means that hopefully there is a bit more of a chance of spotting dark matter in our experiments. As an example, a neutrino can travel through a light year thickness of solid lead and only half of them will stop. Most dark matter candidates are as elusive as neutrinos or more so.

The collision is in our past. If they are right we are already in it, and have been in it for a long time.

This is an image from the paper itself: 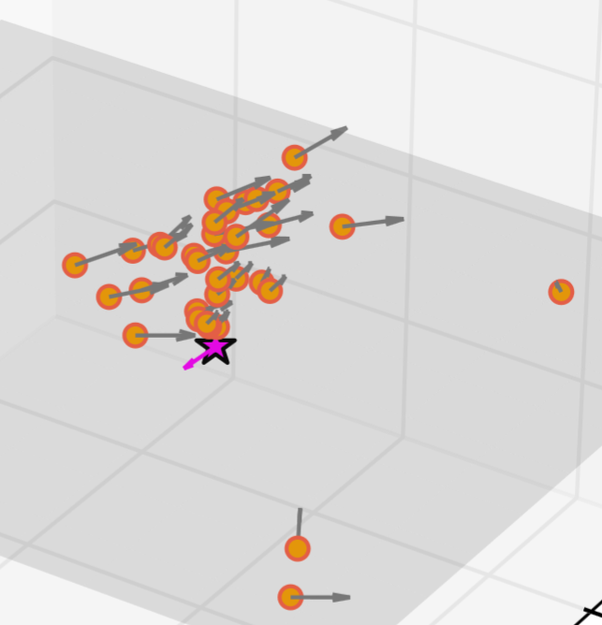 The yellow dots are stars in the stream, and the magenta star is our sun. Arrows show direction of movement. This is figure 1 from the paper.

They have searched for dark matter, and apart from neutrinos which are well studied but don't seem to be sufficient to explain the observations, all they have is indirect evidence from the way that stars orbit galaxies and various other lines of evidence that suggest galaxies are more massive than the visible matter explains, and evidence also that the universe seems to have some matter in it that is different from ordinary matter.

And yes, nothing has changed for generations into past, and into future. All of recorded human history is just a blink compared to these cosmological timescales.

This is a much more accurate story about it from a top astronomy magazine:

And another good story

As Gizmodo put it in that last story:

So, if there is a dark matter hurricane, we’re literally inside of it right now. But we’re safe (from the dark matter, at least). This so-called storm is most exciting for its scientific prospects. Said O’Hare: “We know so little about dark matter that any sort of better knowledge about its structure adds up to help us understand it.

This is the synopsis they are all working off:

The paper is here:

It is hard to spot because you are talking about picking out a few stars from the background of vast numbers of stars. Until recently we didn’t have a good way to check which way stars were moving except painstakingly one star at a time. The big Gaia survey changed that with precise position and movement measurements of over a billion stars, and that is how it was discovered.