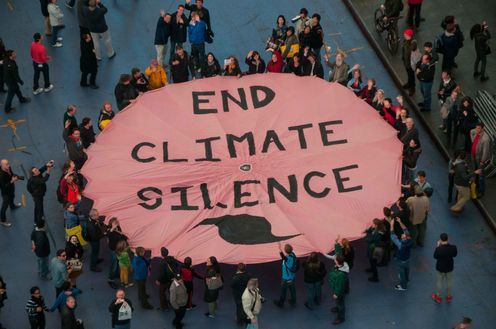 It can be tempting to think that people who disagree with you are mad, bad or simply stupid. However, not only are such judgments usually wrong, but telling people that they are stupid is unlikely to convince them of the merit of your own view.

Yet this is often what happens when it comes to debates about climate change and what we ought to do about it.

Despite there being a near consensus in the scientific community that the primary driver of climate change is anthropogenic carbon dioxide emissions, and that we need to cut those emissions if we’re to keep global warming to a minimum, the public remains divided on the issue.

This division seems to run deeper in certain countries, such as the United States and Australia, where there are many vocal skeptics of the notion that climate change is caused by human activity.

It is common to think that believers and skeptics about anthropogenic climate change are simply people who hold different views. But we think it is more accurate to think of them as belonging to social groups that are working to achieve opposed policy objectives.

This latter view is often used to understand the division between pro-Life and pro-Choice stances in the abortion debate, for example. These are not just positions where people may “agree to disagree”, but rather they seek to promote their position in public opinion and in government policy.

In a paper published today, we took a similar perspective on the climate change debate in the US. What we found is that people’s attitudes in favor of action against climate change, or attitudes to the contrary, are predicted by three inter-related dimensions.

The first is a sense of identification with their own group. Secondly there is a perception that their group is likely to succeed in its collective efforts – what we call “group efficacy”. And finally, they tend to have feelings of anger towards their perceived opposition.

These dimensions work together to create a collective sense of “us” in opposition to “them”; a “group consciousness” that is present for both skeptic and believer groups.

This finding is important because it suggests that these groups do not co-exist in a social vacuum. They are not just indicative of differences of opinion, but rather are two social movements in conflict.

In light of this, we propose that strategies for building support for climate change mitigation policies should go beyond attempts to simply persuade, educate or improve the public’s understanding of science. Instead, they should incorporate strategies aimed at improving intergroup relations.

We suggest that rather than concentrating solely on the skeptic movement, attempts to build consensus need to include both groups. They should also take into consideration the dynamics between them.

For example, communication from the scientific community and its supporters that ridicules skeptics’ concerns is likely to drive the groups further apart.

This is particularly problematic as we know from previous research on the politicization of climate change. Ridicule is only likely to strengthen skepticism and therefore increase skeptics’ determination to act in support of their groups’ cause.

As Tom Postmes, of the University of Groningen, notes in an article in Nature Climate Change:

[…] to convince a sceptical public, believers need to harness knowledge about social movements and intergroup conflict reduction […] as with any conflict between two groups, efforts should be directed to prevent escalation, improve the relationships, and focus on the dynamics within groups that prevent progress.

One way forward is to use what we know from the history of other social movements along with techniques of conflict resolution. From a theoretical standpoint, the conflict between skeptics and believers is similar to other conflicts in history that pushed forward our society. For example, the civil rights movement in the US, created a sharp division in American society, but in the long term has led to major advances.

Another path that could lead to increased consensus is to harness intergroup communication that promotes conflict reduction by maintaining dialogue between the sides in conflict, along with being open to engagement and collaboration.

Conflict between groups can also be diffused by shifting the focus from differences to focusing on similarities between the members of the two groups. And, more importantly, on broader goals that both groups share.

So if you want to promote climate change action to people who don’t believe in climate change, then you need be mindful of the social dimension of people’s beliefs. That, and work to convince sceptics that that action is worth doing anyway.

Ana-Maria Bliuc, Lecturer in Behavioural Studies and Politics at Monash University, receives funding from the Australian Research Council (ARC). Craig McGarty, Professor at University of Western Sydney, has received funding from the Australian Research Council and from the Young and Well Cooperative Research Centre. He makes regular donations to the Wilderness Society and is a member of the National Tertiary Education Union. This article was originally published on The Conversation. Read the original article.