Authoring a Paper in Public, the Next Level in Open Science Communication, Oh and a Theory of Everything.
By Hontas Farmer | May 29th 2017 11:20 AM | Print | E-mail

Hontas Farmer
Open science communication is not a new idea but the idea of doing the composition of a paper on a cloud based, search indexed, public platform where anyone can see how the sausage is made is.   Authorea is just such a platform and I am using it to put the finishing touches on a paper dealing with a true theory of everything (a field of study littered with corpses so suffice it to say I may well be wrong like everyone else who has tried.)  the main topic of this blog is to be the act of publishing on Authorea or a similar platform vs traditional LaTeX editing.
Authoring with Authorea

At the 2013 April APS conference I had a long talk with one or two of the journal editors about the future of publishing.  Mostly I asked and then listened to them.  They seemed pretty confident in the power of LaTeX and skeptical of the idea of replacing it with a WYSIWYG interface or some sort of web based editor.   Something similar to the then still new Google Docs.   Now we have just such an interface, Authorea

Authorea offers a "What You See Is What A Browser Can Display" user interface and editing environment.

Compare this to a traditional LaTeX editor.  This screen shot is the exact same paper in plain LaTeX. 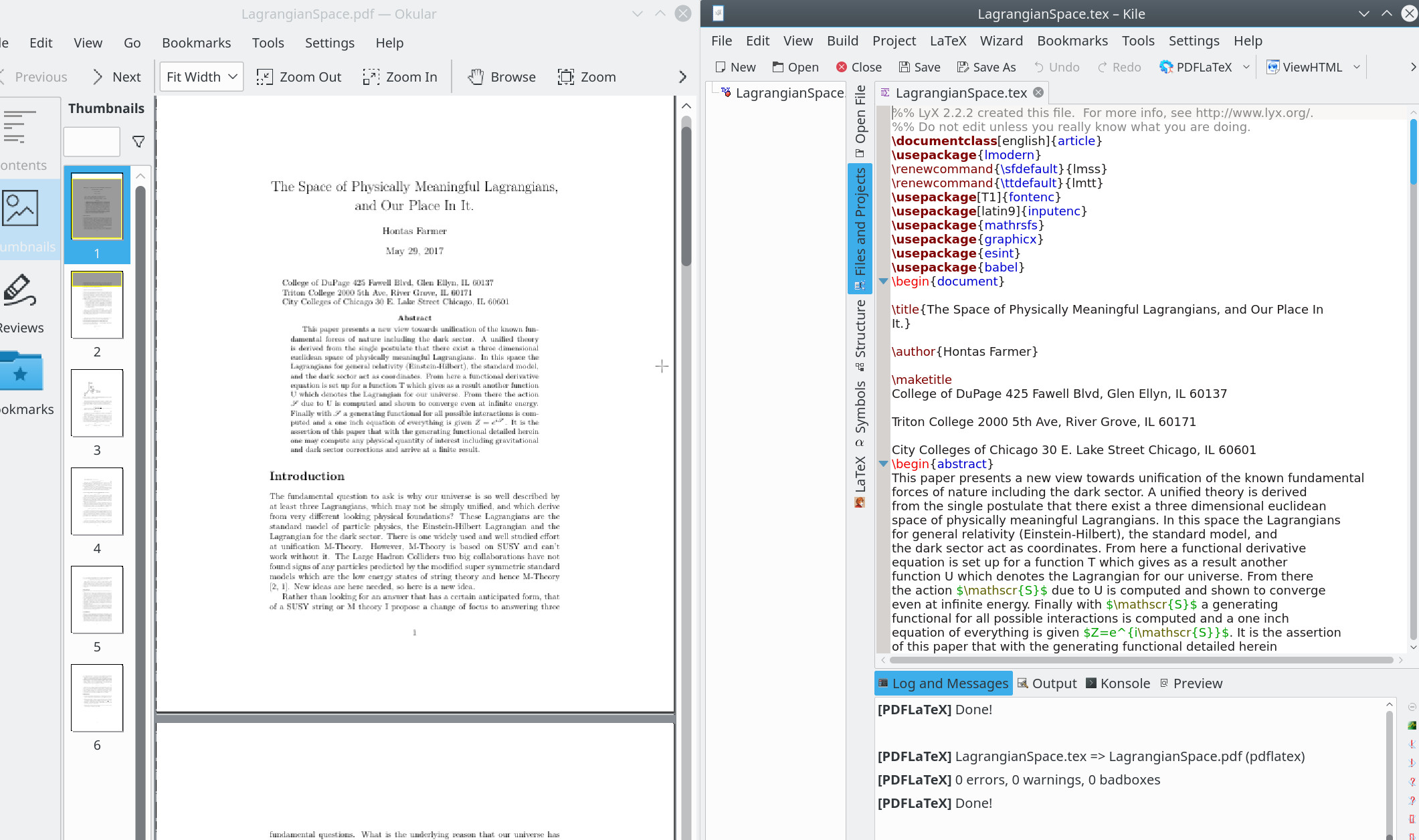 I think those two pictures say it all.  Which type of interface would you rather work with?

Authorea has a few limitations and nothing can replace the power and flexibility of LaTeX edited in plain text.  Lets be honest though, how often do papers, even in physics actually use that power beyond typesetting some math and a table or two? Check the list of new papers on arXiv today (any day) and odds are they don't have that much that an HTML5 based interface could not.  Meanwhile in theory something like HTML5 can support interactive graphics and videos as parts of scientific papers and not just static figures.

I predict that in another decade LaTeX editing and publishing as we know it will be obsolete.  LaTeX will be used only for equations, and very specialized typesetting possibly handled internally by the journal staff themselves.

All that said, Authorea is still in Beta and it has a little ways to go.  Perhaps a more robust UI for using LaTeX math.

Oh and a Theory of Everything.

I have stayed away from theories of everything and stuck to the question of quantum gravity by itself.  I have lately worked on a model where the path to a workable "quantum gravity" is through relativization of quantum field theory. Then formulating a Lagrangian where the interaction between gravity and other fields introduces counter terms which cancel out the infinities.   I have written on this topic and spoken on it at conferences since 2015.

Now, in 2017, I asked myself if the Lagrangian I used in that work could be derived from more fundamental physical assumptions or postulates?  The answer is yes, and the results of that inquiry are detailed in the paper on Authorea where I assume that anyone who registers may comment.

So, I invite comments on the paper itself there not here so I can act on them and they can be recorded with the paper for posterity.   Productive comments which show that one has actually read this paper and tried to understand it before commenting are welcome.  Insulting remarks, trolling, and other such nonsense should be saved for 4chan or something.    I know that like most attempts at a theory of everything it is highly probable that I am wrong.   Remember your comments may live with the paper forever.  Just in case I am right a content free ad hominem  couched in scholarly language may not be wise.

Measured public critique presented in a civil manner of any idea whether it is in the end supported by data or not should never be anything to be ashamed of.   Not comparing myself to anyone but pick a well known scientist or paper...all of them had nasty comments that we chuckle at now.

Link to view paper in progress on Authorea. "The Space of Physically Meaningful Lagrangians, and Our Place In It."