Patrick Lockerby
The Anatomy Of A Discovery


Now, I could blabber and bluster about how I once advised Margaret Thatcher1.  Which I did.  In a private letter which was answered by the Iron Lady herself in her own handwriting.  I had further communication with her via my local M.P. - the politician, not the policeman!  All of which has nothing whatsoever to do with my reputation in the science community.  Nor should it.

It is exactly because this is a science site that I want you to agree to do one thing for me:

Don't believe a word I say based solely or mainly on what you may think of my skills.

One of the major triumphs of the modern scientific method is its power of prediction.  A theory is formulated.  It is not just any old theory that someone came up with in a bar: it is a suggested chain of causality based on observations of events.  Given the supposition that C causes E then we need only observe C to see if it is the most probable known cause of E, or we observe E to see if it was most probably caused by C.

But science demands independent verification.  The person who first suggests a theory is not trusted to be the only person to supply proof of the theory.  Other, entirely independent witnesses are required to corroborate the validity of the theory in the court of science.

But science demands independent verification.  So, if I post up anything at all and claim that it came from another web page or site: don't just believe me when I tell you where it came from - follow the link.

Please do follow the links in the text below.

I have written a great deal about global warming and climate change and have made several successful predictions - most notably the recent calving of an ice island at the outlet of the Petermann Glacier's floating ice tongue.  As the first person to publicly report that event, and as the only person - to the best of my knowledge - to predict it's scale, I feel entitled to be given due credit as a person who may know a thing or two about the things of which he speaks.

Trudy Wohlleben of the Canadian Ice Service discovered the ice island within hours after NASA's MODIS-Aqua satellite took the data on Aug. 5, at 8:40 UTC (4:40 EDT), Muenchow said. These raw data were downloaded, processed, and analyzed at the University of Delaware in near real-time as part of Muenchow's NSF research.

As a result of that news release, the world's media and bloggers are reporting that Trudy Wohlleben discovered the ice island.  I don't dispute this.  I simply claim to have done so first.  I certainly published first.  I also predicted this event.

Judging by previous behavior and by the forces which will act on a more mobile ice tongue, I predict some dramatic calving this year.  The image below shows red lines where I expect the tongue to calve.
July 17th 2010 07:26 PM
Arctic Ice July 2010 - Update #3

If you check the area bounded by the continuous red line between the snow caps either side of the glacier tongue you will find it is a very close match to the actual size and shape of the ice island.  It is about 250km2 in round figures.

The Petermann ice tongue looks primed to lose a few fairly large floes any day now.  There are a lot of cracks showing at 250m resolution.  That means the cracks must be at least 250m wide.
...
It looks like a few small bergs- about 2 or 3 km across - are going to break off before the main tongue breaks up.  The bigger fracture back at the tributary glaciers needs a lot of back-pressure relieved before it can expand much.
...
The Petermann ice tongue tip has held almost the same shape since winter 2008.  It has had nearly two years in which to thin and crack.  I would be very surprised if it does not retreat substantially this year.
July 22nd 2010 03:32 PM
Arctic Ice July - Update #4

The first hint I had of a spectacular calving was when I saw this image: 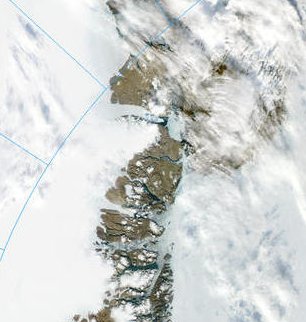 Even at that resolution the glacier tongue tip looked decidedly different from its previous 2010 appearance.

When I went to the 250m resolution image I was astonished.  Not astonished that the ice island had calved, but astonished that it had done so as a whole piece.  I had expected fragmentation during the course of a few days.  Although I predicted the amount - about 250km2 - fairly accurately, I had not predicted that it would break off all at once. 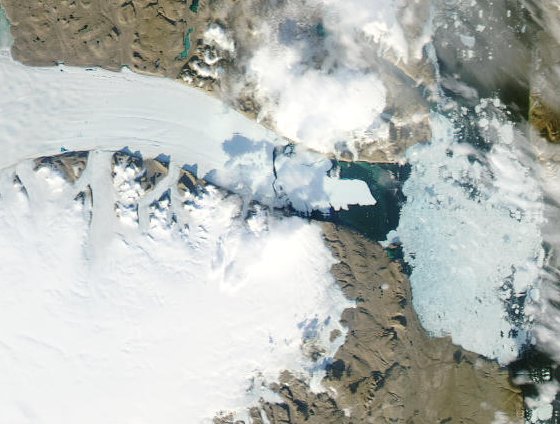 I checked via a Google search to see if there was any mention of this event anywhere on the web.  There was nothing.  Nothing new on "Petermann glacier", "Petermann ice tongue", "Petermann calving" etc.  This search for prior publications is an essential part of scientific research.  Had I found anything published on the August 2010 separation of a Petermann Glacier ice island I could not claim priority - I would, however, be confirming the validity of the prior observation.

The next image was good enough for my article, so rather than wait for an even better image and risk losing priority I used it and published my article.  It is just as well that I did: the fourth image was not so clear.

The MODIS Rapidfire system takes the raw data from the aqua satellite and processes it automatically into a preliminary image.  The image is then posted for public use very soon after.

The MODIS Rapid Response System was developed to provide daily satellite images of the Earth's landmasses in near real time. True-color, photo-like imagery and false-color imagery are available within a few hours of being collected, ...

I sent out some emails to publicize the news of the new ice island with links to my article.  I have had no responses so far.

It is only natural that I should be the tiniest bit annoyed2 not to be given credit for predicting this event and credit for being first to publish when it happened.

A further cause of annoyance is that the media - and particularly the anti-science brigade - are quoting the BBC:

Prof Muenchow ... said it was not clear if the event was due to global warming.

And that 'not since 1962' is being picked up as 'proof' of natural cycles.  Firstly, the 1962 event  was an ice shelf: the loss of 250km2 of any single Arctic ice tongue in one year is without precedent.  Secondly, the ice shelves that have disappeared were about 3,000 years old.  Their loss is directly attributable to Arctic warming.

I continue to monitor the MODIS Rapidfire images for more activity in Petermann Fjord.  The new ice island hasn't moved far yet.  It is quite likely that it is grounded.  If it does manage to wriggle its way into the Nares Strait it will be a most welcome event for those of us who are concerned about the global impacts of Arctic ice loss.  Blocking the Nares Strait will prevent ice loss from the Lincoln Sea: an area where ice compaction can be enhanced by a blocked strait. 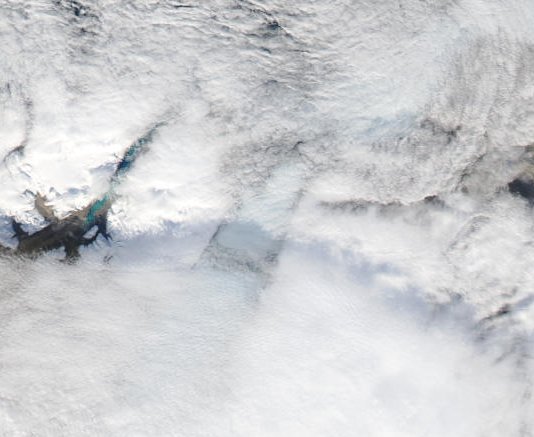 Without a cloud free image or radar image it is impossible to tell if there has been any further calving.  I expect to see at least a small amount at the new calving front.

There is another large area primed to give way, but without a clear image to study I can make no new prediction as to when it will detach.


More articles on the Arctic and related subjects: The ChatterBox Arctic Index


[1] - Margaret Thatcher, former Prime Minister, was an ardent advocate of taking steps to deal with the climate change problem.  This is clear from her many speeches on the topic.

The problem with advisers is all the more striking in that MT made great efforts to draw on the opinions of people outside the official machine and her own staff. In fact there are files of correspondence with these irregulars. But what these efforts finally show perhaps is that her deepest instinct was that she could really only trust herself ...

So let me confirm unequivocally tonight that the United Kingdom will meet the commitment which it has solemnly accepted to reduce acid emissions and we shall do so by embarking on a major programme of investment to protect the environment, not relying on a single method alone but combining desulphurisation equipment, new gas-fired plant and other means such as the use of low-sulphur coal. Not only will our investment meet our commitment to the Large Plants Directive in full—it will also make a major contribution to reducing carbon dioxide output.

Hmmm.  I seem to recall someone advising the Iron Lady that there is no need to reduce CO2 emissions because all this 'CO2 causes global warming' nonsense is, er - nonsense.


[2] - here to view Hank Campbell's profile.">Hank Campbell has every right to be a bit more than annoyed.  Most of the web traffic generated by this news should be coming to this site and helping to pay for it.  He should, by now, be jumping up and down and cursing me for frying the servers.  :-)

[3] - If an anti-science champion gets pneumonia, does he - rarely she - compare it to the flu he had a few years before, and put it down to natural variability?  Or does he demand the attention of a doctor?
The Chatter Box
More Articles All Articles
About